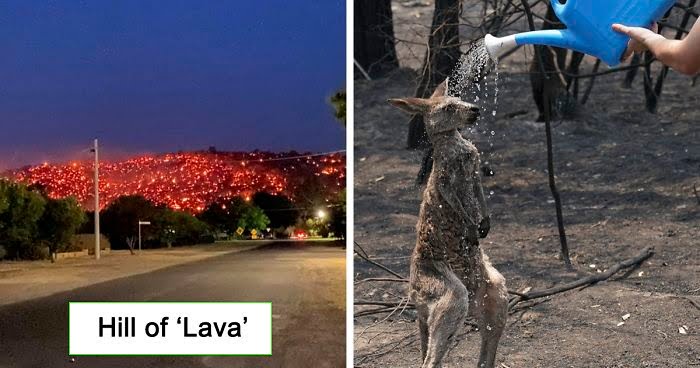 When bushfire incidents were first reported in Australia last year, people were not worried. Bushfire happens every year and firefighters often managed to control them within weeks. But in 2019, people did not imagine that they’d enter 2020 while being stranded on the beach, inhaling dangerous smoke from the raging fire

Australia is burning – hundreds of fire spots appeared and every single battle won simply meant firefighters needed to move on to the next spot. Almost half a million wildlife are presumed killed from the fire and several people dead. The Irwin family has helped more than 90,000 animals, but even that is not enough.

Greenlemon has compiled this list of pictures that show just how devastating the situation is in Australia. Australian readers, please stay safe!

1. The nation’s true heroes now are firefighters with a majority of them volunteers who take unpaid leaves.

2. This young man has been saving injured wildlifes in Mallacoota after the fire passed through. He’s rescued 7 koalas.

3. This heart-breaking picture of a man watching the apocalypse that is befalling his country.

4. Sharing help whenever they can.

5. Firefighters are doing their all to save all.

6. This small kangaroo looked for human for help and this young boy poured him water.

7. Every one of volunteer firefighters deserve credits.

8. This woman rushed through fire to save a koala and gave him water afterwards.

9. The family has been fighting for fire on their farm and this is dad getting a short break after his 12-hour shift on his 10th day working for the NSWRFS.

He cried from exhaustion and desperation, “Jen I have never seen anything like this, it’s never ending.”

10. This surreal and unedited picture of a boy watching his country burn.

11. They have worked hard and now they are so tired of the fight.

12. This man worked 15-hour shift when this picture was taken.

14. NASA’ 3D visualization of the fires that are burning on Australia’s continent.

15. This adorable baby kangaroo was left to burn on its own, saved by a firefighter.

16. This man has fought fire for 13 hours with the NSWRFS. You can see the exhaustion on his face.

18. Firefighters and volunteers dancing as rain falls over bushfires.

21. The poster has fought fire for a total of 776 hours (32 days) for the past ten weeks. Equipment are breaking and the fighters are getting tired. He’s finally getting a 48-hour rest as he deals with the comedown: headache, nausea and shakes.

22. Perhaps, there is still hope in Australia (scene post-fire with a beautiful Kookaburra).

23. This non-edited picture of a city that went red from the fire.

25. The largest fire in Australia was ‘Black Saturday’ that

26. A local postman took a picture overlooking his city being engulfed in smoke.

28. ‘Black Saturday’ burned 450,000 hectares and was marked as one of the darkest days with more than 150 people killed.

29. These red images of when more than 4,000 people were stranded on the beach waiting for rescue in Mallacoota.

30. An illustration. In addition: thick smoke is able to generate their own climate which includes storm and fire tornadoes.