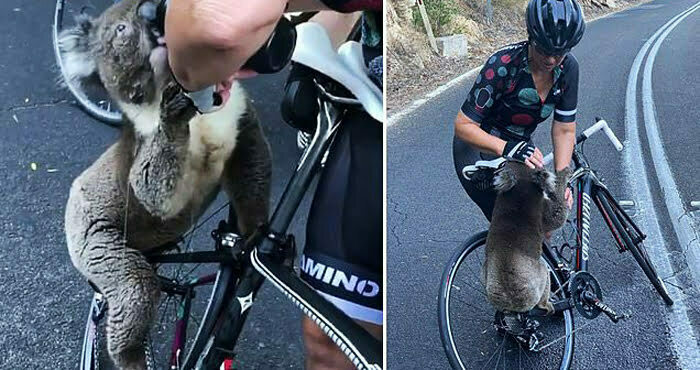 Koalas are some of the most iconic animals from Australia and they are currently facing a seriously endangering situation. Thousands of acres of lands where these koalas thrive are currently burning to the ground. Hundreds of koalas have been rescued with even more reportedly dead.

Among one of these koalas who’ve survived is one who encountered Anna Heusler and her cyclist group who were riding to Adelaide. They saw this parched koala just sitting in the middle of the road. It quickly jumped to Anna and asked for water, which it had a lot of later.

“I stopped on my bike and he walked right up to me, quite quickly for a koala, and as I was giving him a drink from all our water bottles, he actually climbed up onto my bike,” said Anna when interviewed by 7News.

The whole experience was cute, but also devastating as these creatures typically avoid human contact. They mainly live on eucalyptus trees which is also their main diet, but their habitat is currently burning. The temperature has also soared up to 40 degrees Celsius and it can be deadly to these easily stressed out gentle creatures.

The koala was so thirsty it quickly finished one bottle of water.

Approximately 25,000 acres of land have been burnt to ashes in the Adelaide Hills, killing thousands of native creatures. Among them, koalas suffer tremendously as they tend to climb trees due to instinct and trap themselves in the fire. Some even had to euthanize due to severe injuries and pain.

It also appears that this is not the only koala she has had given drink for – previously, she also posted another koala which she gave water when the temperature was scorching.