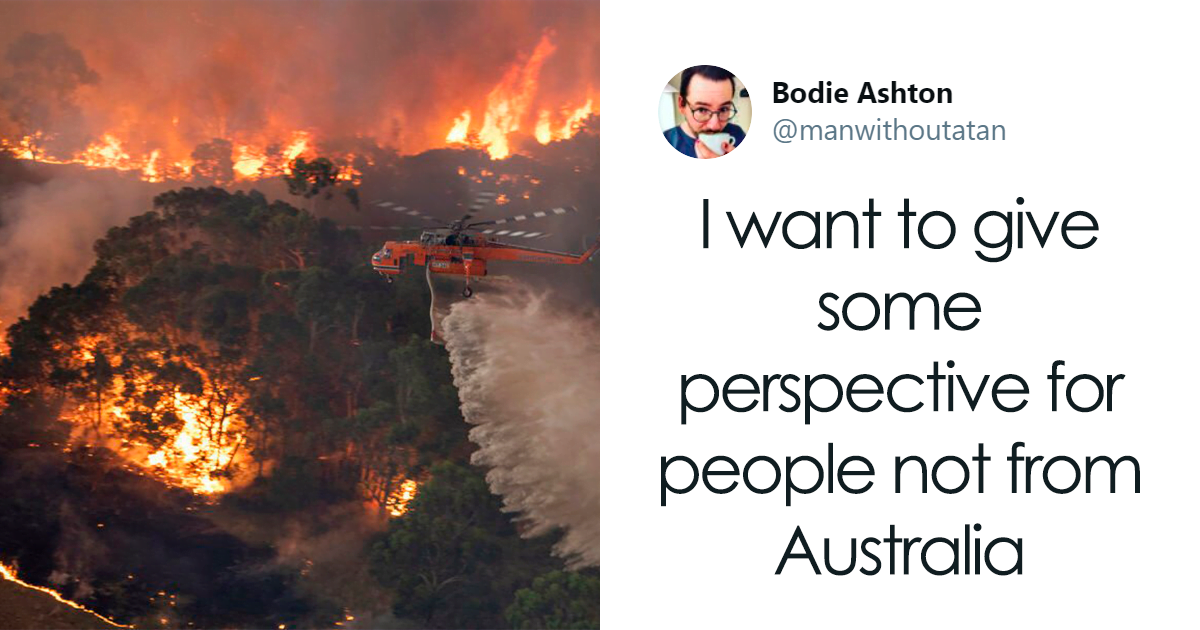 More than a million acres of rainforest were burnt in Amazon, but that was not enough to turn the head of the people.

Currently, more than 6 million acres of land has turned to ash in Australia with the fire showing no signs of stopping. Thousands of people are stranded on the beach and had to be evacuated by water and air as land access had been blocked with scorching fire. More than 400 million of wildlife creatures are gone, putting a huge dent on the native species.

Since September 2019, New South Wales has been experiencing bushfire which quickly grew severe.

The country was supposed to experience rainfall at this moment, but the wind had blown that rainfall elsewhere, causing the land to dry up. Green Lemon wishes to raise awareness on this incident and this man’s tweet did the trick.

Bodie Ashton, a historian, took to Twitter to explain what is happening in Australia to the world.

He also shared the harsh fact that these firefighters not only risked their lives but also won’t get enough pay to support themselves and their families.

And then there’s the PM, Scott Morrison, who was blamed by many due to the crisis that is currently raging.

The smoke from bushfire is also causing severe breathing problems and is equal to smoking a packet of cigarettes a day.

Australia is facing losses and emergency situations not seen in years.

Approximately 1300 houses have been burnt with 20 killed, including 3 volunteer firefighters. Australia worst bushfire was in February 2009 dubbed the ‘Black Saturday’ with 180 deaths and more than 2000 houses gone. The spread is lightning fast as grass fire burns much faster than forest fires or the average running speed of a human.

The size of bushfire in Australia is currently bigger than London.

Here’s another way to see how vast the destruction of the bushfire is.

Ashton added that the government should be addressing the climate change issue instead of relegating is as purely ‘political’. He further explained his points with more tweets under his thread.

Ashton explained that as an Australian historian living in Germany, he just wants to help people visualize better what’s happening in Australia. As severe as it is, people don’t seem to understand how it’s directly affecting a large number of people. But it is and it will.

Ashton added that the fire is affecting millions of people in Australia and there are volunteers fighting and racing against time to curb it. He finally emphasizes that we can all do something to help them and one way is by donating to organizations who directly fight against fire and provide medical aids to people and wildlife.