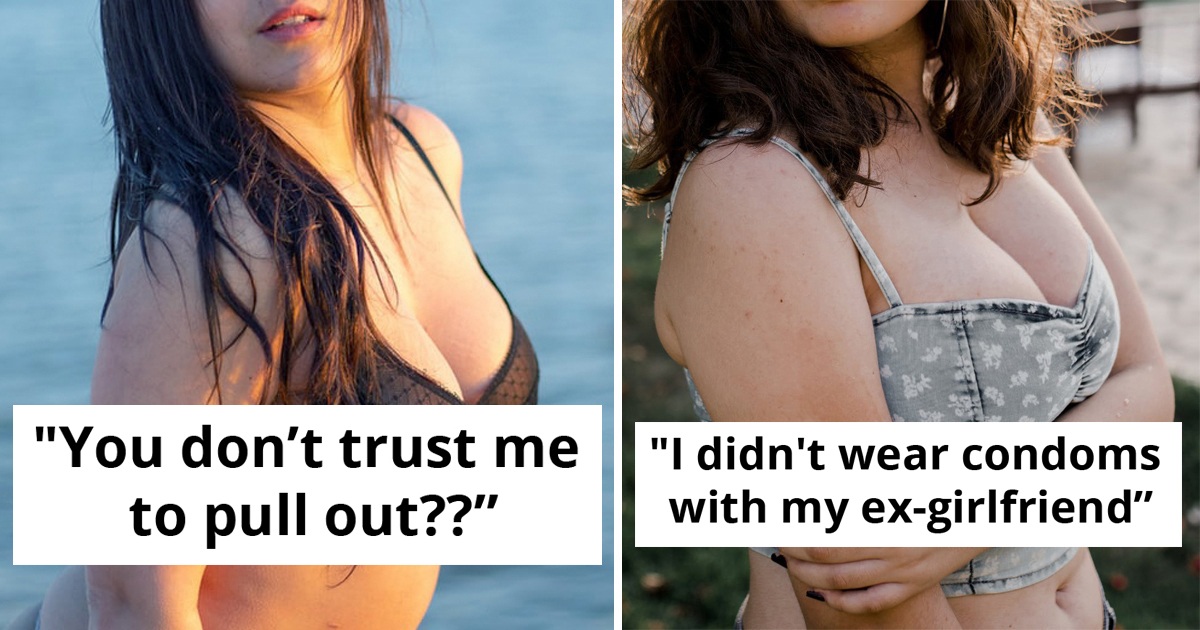 Just no. If a woman asked you for it, you either walk out the door or agree to it. There’s no way around it. Yet, we see men coming up with all kinds of excuses to not use protection for what they are about to do. Because their expression of love cannot be shown correctly when rubber is in the way.

Buckle up ladies, and get ready to virtually punch the air as you read these ridiculous excuses men come up with. All to avoid wearing a condom because women are the ones with the risk.

“It’s like taking a shower with a raincoat on.” – Perfect_Cookie

“I lose my b*ner every time we try to put the condom on.” – cuppablackcoffee

“Oh, I’ve heard it all. They’re too small, too dry, I can’t feel you good enough, I can’t get hard if I have to put it on, they’re a mood killer, I’m allergic to latex, I’m allergic to condoms in general, if you need to use one you don’t love me enough, they smell funny, the package is awfully hard to open, I’m clean, I’m sterile, if you get pregnant you can abort it, or we’ll raise the kid together. GOD, men can be dumb sometimes. I’ve been married for a long time now, we still use condoms. If I’m ever single again there’s a huge possibility I’ll live a sexless life cause I can’t deal with that (and other recurring) BS anymore.” – NewsAggressive4867

“I want to feel you completely babe. As you are.” – Ms_Dimpled

“‘I didn’t wear condoms with my ex-girlfriend.’

Like good for you darling, but I am my own person with my own preferences and I’m not comfortable having sex without condoms.” – ComicSandsReader

“Worst excuse ever: Heard a friend saying once, Using a condom can never satisfy a partner.” – Hunter0955

“Come on, baby. You know I’m allergic to when it doesn’t feel good.” – HolyGralien

“‘It’s not necessary I’ve been tested and I’m all negative.’
Bro there is no way for me to verify that at 2 am.” – cursedcutie

“I’ve had a vasectomy,” and “this isn’t a whorehouse.” Two different men. I sure knew how to pick ‘em when I was young and dumb!” – ScaredySnez

“I wouldn’t mind making a baby with you.” – maid-for-hire

“I got hit with the “allergic to latex” line. Which was hilarious because I am allergic to latex so all the ones I have are latex-free. When I pointed that out he tried another excuse so I told him he wasn’t getting laid and sent his **s home. We broke up shortly after.” – missmeowwww

“A few years ago a friend was dating a guy and his excuse was that he found out he couldn’t have kids. Anyway, her kid started kindergarten a few days ago.” – skol_troll

“Why put a condom on when we are gonna eventually take it off?” – linux4e

“But you’re on the pill!” The pill doesn’t stop STDs and you can still get pregnant while taking it.” – FencingFemmeFatale

“Dude has 5 kids with 4 different women and is still looking for other women to sleep with.

I asked him if he knew what condoms were, and he said that his grandma was hardcore Catholic and it would bother her that he was using a contraceptive, to which I asked him if he was religious.

He vehemently denied it saying he hates religion to which I asked him again why he can’t use them. Again he replies about his grandma so I’m like, “bro is granny in the room with you when you do the deed? She won’t know unless you’re telling her!”