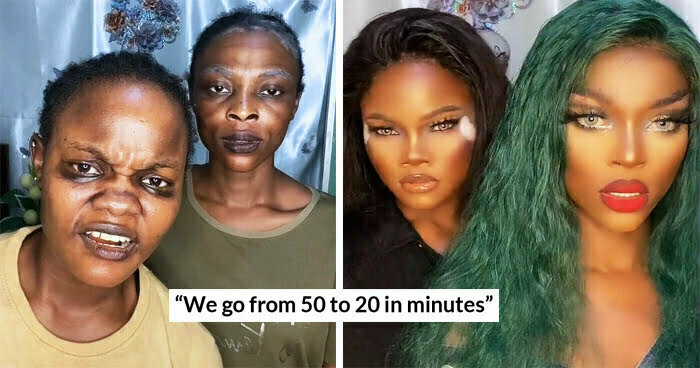 Ray Dazzy has caused an outrage online after sharing a before vs. after video of herself and her cousin Rosalindra Dershmuk, from ugly ducklings to damn gorgeous. The video, [now viral], has got people asking the government to completely ban makeup. At the beginning of the footage, the pair showed off their makeup-free faces.

And as The Boss Wives Pretend played over the top, the duo looked down the lens and drew attention to the dark circles under their eyes and greying hair. Then, they displayed their mind-blowing transformation, going from make-up-free to magnificent with glowing complexions and sparkling eyes.

Their video has got people urging the government to completely ban makeup.

At the beginning of the clip, the pair showed off their make-up-free faces for the camera.

Their hair equally went from short and greying to long, courtesy of a black and green wig. Without holding back, hundreds of people took to the post’s comment to express just how terrified they were by the power of makeup. However, a few people were left impressed and praised the relatives.

They even drew attention to the dark circles under their eyes and greying hair.

But as they showcased their new look, the pair looked incredible with glowing complexions and sparkling eyes.

“This is illegal,” One person wrote. A second stated: “Like seriously can the government ban make up. While a third added: “No wonder men don’t trust us.” Another hilariously said: “That’s the reason I always go on a date when it’s raining. Some people commented that the duo went from 50 to 20 seconds and even asked what sorcery is this?

Their hair equally went from short and greying to long, courtesy of a black and green wig.

So far, Some people have questioned whether or not the pair had used makeup to look worse in the ‘before’ pic.

Others suggested the cousins had made themselves appear worse in the make-up-free look initially, using cosmetics to make their under-eyes darker and their teeth yellowish. “You guys are hilarious with that before makeup shot. The after is gorgeous, though.” One person wrote. While another said: “Acknowledge the makeup before as well! Well done, ladies!”