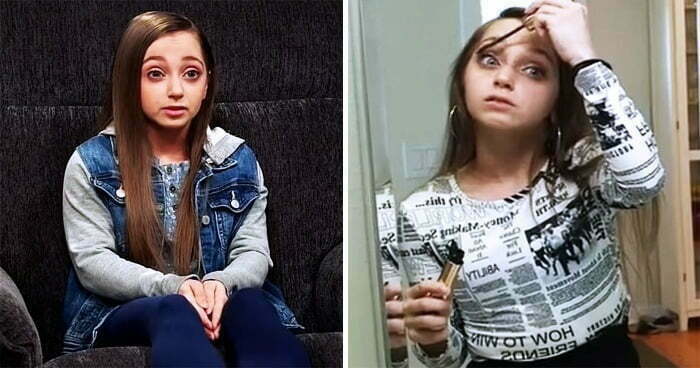 Woman, 22, Stuck In The Body Of An 8-Year-Old Gets ‘Negative Attention’ Wearing Makeup

Shauna Rae has been documenting her struggle to be treated as an adult. The 22-Year-Old naturally appears like an eight-year-old, which resulted from a cancer treatment that stunted her growth. On her latest appearance in the new TLC reality series “I Am Shauna Rae,” which premieres on Jan 11th, Rae revealed her mom gets negative attention from strangers when she wears makeup & dresses her age.

Shauna Rae reveals her mom gets “negative attention” from strangers when she puts on makeup.

The 22-Year-Old who appeared in the new TLC reality series ‘I Am Shauna Rae is ‘stuck’ in the body of an 8 Y.O.

In the new preview clip by the People and on Instagram, she explained she usually doesn’t do full-face makeup, just eyeshadow, and mascara. Rae added that she doesn’t like wearing a lot of makeup anymore. “I think whether I’m dressed up or not; I get; attention. I think when I’m dressed up, and I have makeup on, my mom gets negative attention. I don’t think it’s any different for me; I think it’s different for my family.”

In the latest preview clip, Rae revealed that she doesn’t do full makeup, just eyeshadow, and mascara.

She also insisted she doesn’t wear a lot of makeup anymore!

Rae’s stunted growth is an aftermath of her surviving brain cancer as an infant. At 3 feet, 10inches tall, she’s the average height of an 8yearold, and she’s regularly mistaken for a child. She’s so short that she has to carry a chair into the bathroom to stand on to see herself in the mirror while doing her makeup. Her mom Patty explained that Rae likes to dress up like any other 22-Year-Old.

In the clip, she was then seen carrying a chair to the bathroom to stand on while doing her makeup.

At 3 feet, 10inches tall, she’s the average height of an 8yearold, and she’s regularly mistaken for a child.

And that when they go out together, Patty shared she gets looks like ‘Oh wow, what’s she doing? What’s that kid doing?” And looks of ‘How could you let your child dress like this?” Rae said her mom tries to explain she’s an adult who can make her decisions, but they don’t believe her and call her a liar. She feels horrible for her mom with all the backlash, especially as no one would come up to a child and say ugly things.

Her mom Patty explained Rae likes to dress up like any 22-Year-Old but gets look like, ‘Oh wow, what’s she doing?’

Rae’s stunted growth is an aftermath of her surviving brain cancer as an infant [pictured with Patty].

Rae said her mom tries to explain she’s an adult, but they [strangers] don’t believe her and call her a liar.

“They think it’s appropriate for them to come up to the mother, which isn’t appropriate at all in my opinion. And I know it affects her. I think she covers it up very well, but I think it’s one of those thoughts at the late of the night that comes up into her head. If someone had commented on me that day, she would overthink it until she fell asleep,” Rae explained.

Patty’s eyes were left in tears as she reveals how ‘guilty’ she feels that Rae will go through this for a long time.

Rae was seen sipping on a margarita in the first trailer while having dinner with her family.

The docuseries follows Shauna as she attempts to live the life of an average 22-year-old woman.

As her eyes well up with tears, Patty admitted she does think about it all the time. “I don’t know why I’m getting upset. It’s just, I feel so. I guess almost guilty that she will have to go through this for the rest of her life. It doesn’t seem like there’s going to be a time that is just going to be okay or is going to be normal for her,” Patty stated.

Rae was six months old when she was diagnosed with a rare form of brain cancer.

She underwent chemotherapy that rendered her pituitary gland almost dormant and stunted her growth.

However, the docuseries follows Rae as she attempts to live the life of an average 22-Year-Old woman while dealing with the challenges of her appearance. The first trailer showed Rae being mistaken for a child when she tried to order a drink at a bar, get a tattoo, and even work out at a gym with an age requirement. Her youthful look also makes dating extremely difficult.

In the show’s trailer, Rae noted that dating is extremely difficult, saying she attracts ‘creeps and a**holes.