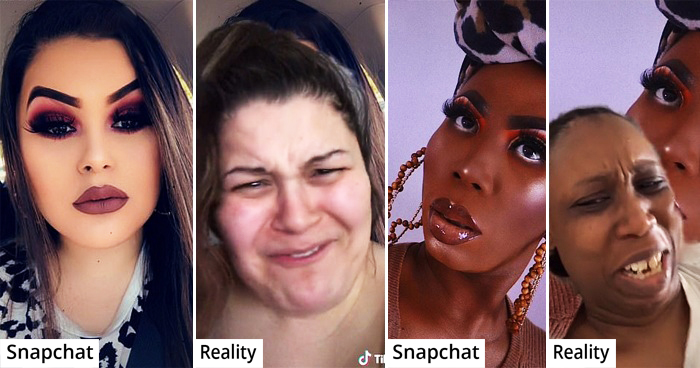 The global pandemic has changed how we (humans) interact and communicate with one another. And despite keeping social distancing, it’s the dream of humans on Planet Earth to feel connected with friends and loved ones. Here’s why social media networks, specifically TikTok, has amassed more viewers and users than ever. On TikTok, challenges are one of the biggest trends, and of course, innovative brands are beginning to use them to fast track their growth while reaching out to millions of people. TikTok challenges can take any form, but the Catfish Moment Trend is presently trending.

Young ladies are emerging on the app, showing off their proudest catfish moments. The online Catfish challenge, initially launched by a 22-Year-Old Australian TikTok User @moldogaa, has now been welcomed worldwide.

Women Are Sharing Their Glamorous vs. No Makeup Faces In Viral TikTok Trend

Sharing a Snapchat selfie with her over 80K followers, @moldogaa had captioned it: ‘Just took this photo on Snapchat. I don’t look like that! Catfish – MEOW!’ Instantly, the clip went viral, and others joined in, highlighting their transformations ranging from glamorous to what they look like.

Hundreds of thousands of TikTok users have since used the audio from the clip in their version of the challenge. As seen in the results, many of the women who partake in the challenge appeared almost unrecognizable, having showcased their glamorous vs. no makeup faces. A few were left laughing out loud at their transformations.

TikTok Celebrity Whitney Kait uploaded her version and did question her over a million followers. ‘Can someone give me the title of Catfish Queen of 2020 already? She asked.

The clip baffled her followers and has resulted in several comments and reactions. Other celebrities and influencers, including Alyssa Violet, and @mzznofilter followed suit in the challenge and also got hilarious responses. Nevertheless, this challenge followed a TikTok challenge, which witnessed parents and older siblings picking up their toddlers, babies and throwing them off-camera.