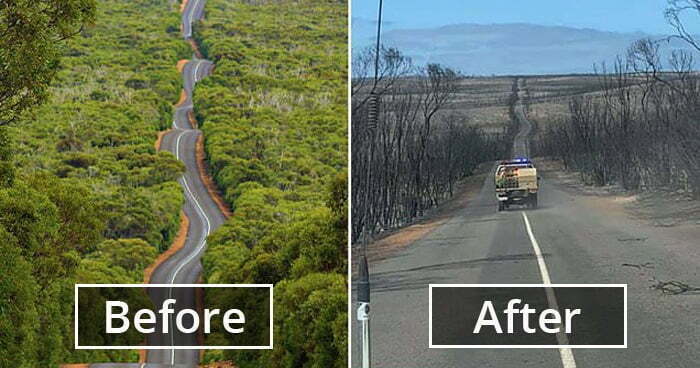 For months, Australia has been experiencing severe bushfire. They rang 2020 in smokes and fire as people had to be evacuated, animals to be rescued and firefighters continue fighting. Many of them spent weeks, working for 10+ hours shifts and some took unpaid leaves to volunteer.

Currently, the death toll has risen to at least 26 people, 2,600 houses confirmed destroyed and a recent rough estimation based on areas burnt and predicted number of animals living in those areas show more than a billion has died. A third of Kangaroo Island has been burnt off with the total population of Koalas expected to have dropped by 25,000 from 50,000.

Green Lemon is showing all the horrifying before and after photos of different areas in Australia.

1. Half the population of koalas in Kangaroo Island is lost to the fire.

2. Charred wood and ash can be seen washed up the shore of Tathra Beach, NSW.

3. A third of the island of Kangaroo Island has also been burnt.

4. Mogo Wildlife Park, all animals were evacuated to safety.

5. Sarsfield, Victoria. Picture was taken 2 hours before and 3 days later. That house won.

6. Old Genoa Bridge on the Princess Highway, a cultural heritage.

9. Wildlife sanctuary in Canberra as smoke settles in the capital.

11. Heavy smoke has also been clouding Sydney and it’s not breathable.

12. The smoke has also reached New Zealand, blocking the view to Mt. Cook.

14. Mallacoota was a scenic town. It was red from all the fire, smoke and heat.

16. These pictures of The Shoalhaven were taken on the same day.

17. Merimbula last year and this year. Could here helicopters landing below, but couldn’t see a thing.