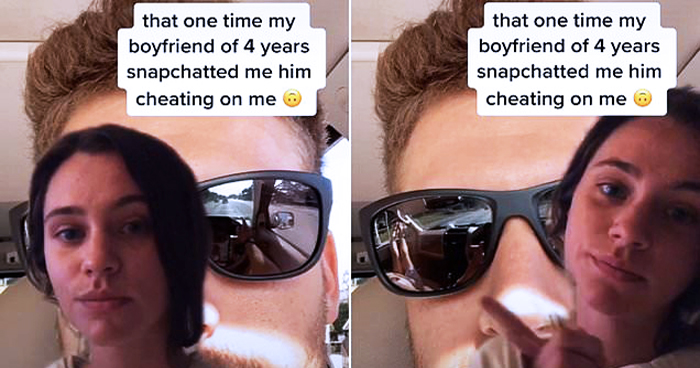 Have you ever been cheated on? What was your reaction? Was it an emotional struggle between disbelief and an acceptance of fate? It’s naturally depressing when relationships fall apart, but it becomes even far more painful for any victim when cheating is involved. Cheating on your spouse makes an unbearable situation much worse as it can leave a person no choice but to disregard you completely. Trust will be lost, and it might lead to rejection on a whole different level. People often don’t think about the aftermath of cheating, but it can honestly be disastrous.

You can but imagine how Sydney Kinsch felt when she realized that her boyfriend, whom she’s been dating for four years, was cheating after he mistakenly sent an incriminating Selfie. Sydney, who has had enough of her boyfriend, took to TikTok to share the bombshell discovery. Her boyfriend had accidentally sent a Selfie, showing him sitting in his car wearing sunglasses.

When you take a look at the picture, it appears harmless at first glance, but then when you look closely via the sunglasses, a woman’s legs can be spotted poking out by the window on the passenger sidecar. ‘Can you check out the reflections in boyfriend’s sunnies, ladies?’ Sydney captioned the incriminating photo.

Through the comment section, Sydney explained how her boyfriend had been cheating for about a month before she found out. ‘I called him and questioned if he knew he sent me a b** in his Snapchat, and he insisted he had no idea. Instantly I sent the photo to him, and he called me crazy, claiming it was our friend’s girlfriend. Also insisting he’s allowed to have friends, my boyfriend was with like five women, and I discovered all the details a week later.’

TikTok users applauded Sydney’s FBI skills, and expectedly her post has garnered over 1million likes. ‘This is how I caught my ex too. A reflection in the window.’ A user said. A second added: ‘This legit also happened to me. My ex took a photo and sent it to me. Instantly, I saw a chic via his glasses reflection. Lol.’ A third commented: ‘I don’t know why he’s got the sunglasses on. He’s not that bright!’