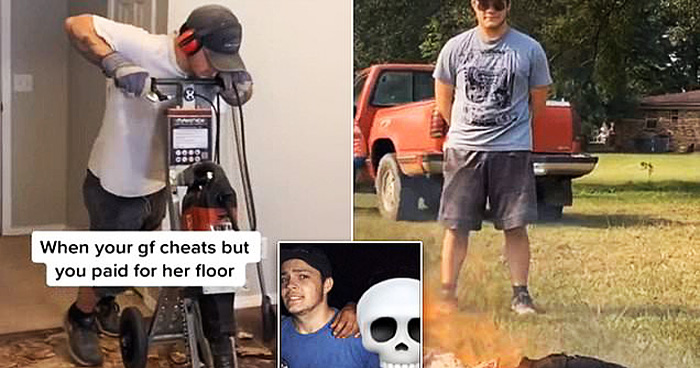 It can really be worse if going through a breakup. Here, an Internet user, specifically a TikTok user shared a clip of his friend using a power drill to rip his girlfriend’s floorboards because she had cheated on him.

The bizarre revenge, which has since earned viral fame, was posted by Ivan Cervantes, 21, and has amassed over a million views and reactions. In the clip, Ivan’s friend – the unnamed boyfriend could be seen using an electric drill to completely destroy the hardwood flooring in GF’s home.

Turned out, the Arkansas resident claimed he had originally paid for the $2,000 Floorboards and even assisted in installing it. The clip revealed shards of wood littering and the boyfriend who wore protective goggles and baseball cap calmly made his way around the room, picking out every single piece of wood. Interestingly, the boyfriend even went as far as burning the floorboards in a bonfire.

‘When your GF cheats but you literally paid for the floor.’ Ivan captioned the video. Reacting, users were left stunned by the prank, garnering over 3.3million, and of course, quite a bunch praised the boyfriend for his actions. ‘This is a whole next level of petty. I truly love it. A user commented. Another wrote: ‘I am a lady but I 100% support this as you should too.’

A third expressed her agreement on the subject matter saying: ‘As a girl, she truly deserves it.’ A few commented, pleading that Ivan shares a clip of the girlfriend’s reaction. Giving an update, Ivan posted another footage of the woman angrily ranting at her boyfriend, dubbing him childish and then hitting him through his car window. ‘You’re so childish. No wonder I cheated on you, I need a man. Maybe you didn’t turn into a man because your father wasn’t in your life.’ The woman said angrily.

Her reactions and harsh comments, however, did spark up comments, with a number of users condemning her behavior and a few urged the now ex-boyfriend to get back at her with more bizarre acts of revenge.