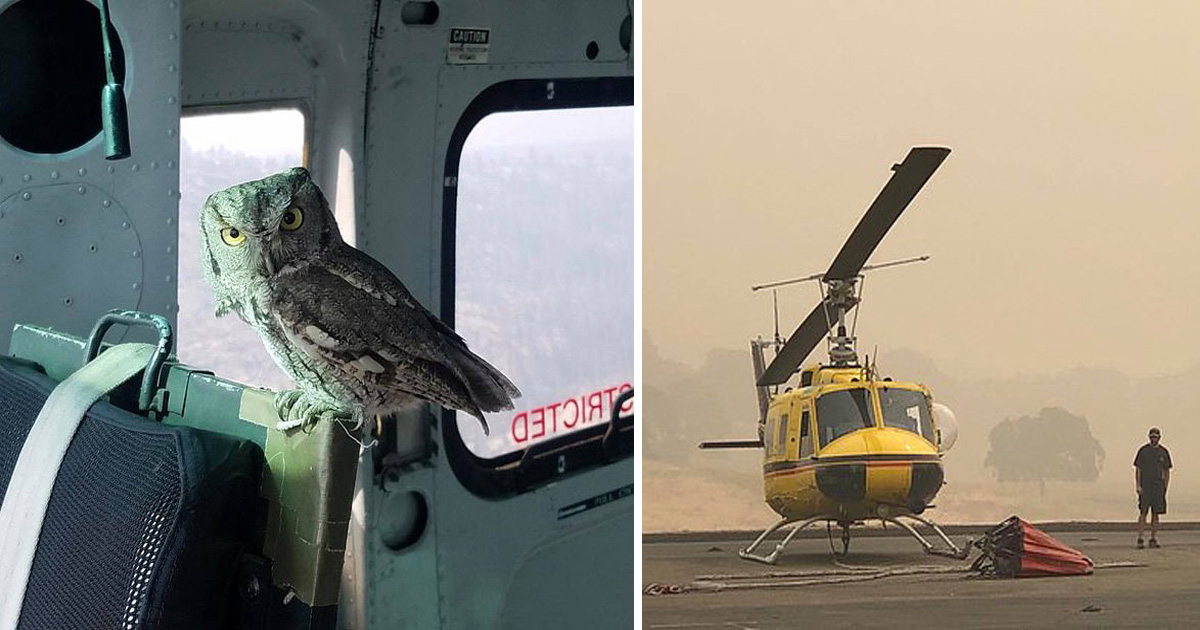 Fueled by severe heat and dry conditions, wildfires exploded across California, blazing through acres and homes. Dubbed the largest single blaze in history, the creek fire equally affected the state’s wildlife regions, including forestation. Expectedly, firefighters are in positions, and of course, many things, including animals, are being saved as fast as possible.

One of the rescue mission has, however, found its way into the headline. The mission recorded an owl catching a lift in a helicopter mid-flight to escape the raging creek blaze. The Owl specifically entered the aircraft at exactly 12:30 pm in Madera County.

Adorable rescue: Wild owl caught a lift in helicopter mid-flight to escape from the raging creek fire in California

The Fire had started in the Sierra National Forest, California. The bird reportedly squeezed through a tiny window of the UH-1 Huey Helicopter piloted by Dan Alpiner, a Sky Aviation officer.  The owl, as seen in a now-viral image taken by Alpiner perched into a seat inside the helicopter for water drops, has experienced hotness.

Unfortunately, more images were impossible to capture as Officer Alpiner was piloting and a photographer simultaneously. ‘It scared me for a second. We both locked eyes, and Owl looked around was chill. I was like, Okay then, are you going to work with me now.’ Alpiner explained the adorable moment via an Interview.

Mathew Dowdy, an American Helicopter Flight Instructor, reacted, explaining that the owl, as well as the helicopter, must have been traveling at the same speed; thus, it was easy for the bird to land on it safely. Nevertheless, the Creek Fire started on September 4th, and now it’s just 55% contained.

It’s reportedly spreading over Fresno County in the South and to Madera County in the North. On the other hand, apart from climate change, beetles have also been blamed for ingesting their way through millions of trees, resulting in heaps of dry timbers.