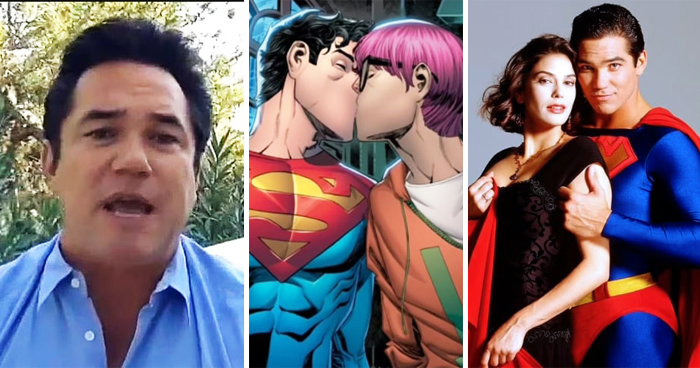 A few days ago, news emerged online that the new superman character, Jonathan Kent, will come out as a bisexual and have a romance with a close male friend in the upcoming issue of the comic series. The internet has been left with divided opinions on the subject matter, and one among the numerous who has been left unimpressed is Dean Cain, the former Superman actor.

The 55-Year-Old had played a hero for four years in the hit 90s TV series Lois & Clark: The New Adventures of Superman. Appearing on Tuesday’s Fox & Friends, Cain accused DC Comics of bandwagoning. He urged the company to focus its efforts on fighting real evil in the world, like human trafficking & women’s rights in Afghanistan.

The 55-year-old actor had played the part of Superman for 4years in the hit 90s TV series Lois & Clark: The New Adventures of Superman.

The new Superman is the latest in a long line of superhero characters to be given an LGBTQ+ plotline.

He also pointed out that Superman is the latest in a long line of superhero characters to be given an LGBTQ+ plotline, which comes just two months after DC comics declared that Batman’s sidekick Robin would be dating a man. “They said it’s a bold new direction. I say they’re bandwagoning.”  Cain said in his on-air interview.

Appearing on Tuesday’s Fox & Friends, Cain urged the company to focus on fighting evil in the world like women’s rights in Afghanistan.

The new Superman is the son of the original Man of Steel (pictured), and his storylines tackle more woke issues.

He added: “Robin of Batman and Robin just came out as bi or gay, and honestly, who’s shocked about that one? I had some thoughts about that a long time ago. The new Captain America is gay; my daughter in [the CW series] Supergirl, where I played the father, she was gay. So I don’t think it’s bold or brave or some crazy new direction. If they had done this 20 years ago, perhaps that would have been bold or brave.”

In August, DC Comics revealed that Batman’s sidekick Robin (Tim Drake) went on a date with a male friend.

Cain had starred in the CW series Supergirl, where the lead character in the show was also gay.

Well, Jonathan Kent, the 17-year-old son of Clark and Lois, is set to come out as a bisexual and begin dating a refugee hacktivist reporter, Jay Nakamura, in a November issue of Superman: Son of Kal-El. The new series, which debuted in July, saw the legendary superhero take on a much more woke stance than ex-iterations of the character.

However, Jonathan Kent, 17, the son of Clark and Lois, will date a refugee hacktivist reporter, Jay Nakamura.

A sneak peek at how Jonathan and Jay’s romance began had been shared for viewers.

And in place of sinister supervillains, Jon took on numerous hot-button issues, including high school shootings, climate change, and the deportation of refugees – all of which are a world away from the old-school evil that the Man of Steel once fought. However, Jonathan and Jay’s relationship details haven’t been yet revealed, but a sneak peek at how their romance began was shared.

Photos from the upcoming comic had shown Jon in his iconic blue and red uniform and Jay kissing.

Likewise, photos from the upcoming comic had shown Jon and Jay kissing and embracing, with Superman clad in his iconic blue and red uniform. At the same time, his pink-haired partner was wearing an orange hoodie, a white T-shirt, and purple glasses. Interestingly, Jay will be introduced to Clark and Lois; a sneak peek showed that the reporter was left shocked with nerves upon meeting his partner’s mom.

Jay will meet Clark and Lois in the issue, with pics showing the reporter struggling with his nerves.

In March, it will be recalled that Marvel revealed their first openly gay Captain American character, Aaron Fischer, which debuted during Pride Month. Fisher was portrayed as a youth advocate in the United States of Captain America comic book mini-series released on June 2nd. According to Entertainment Weekly, creator Aaron Trujillo had explained that the new hero would continue to stand up for the oppressed and the forgotten and hopes his debut helps inspire the next generation of heroes.