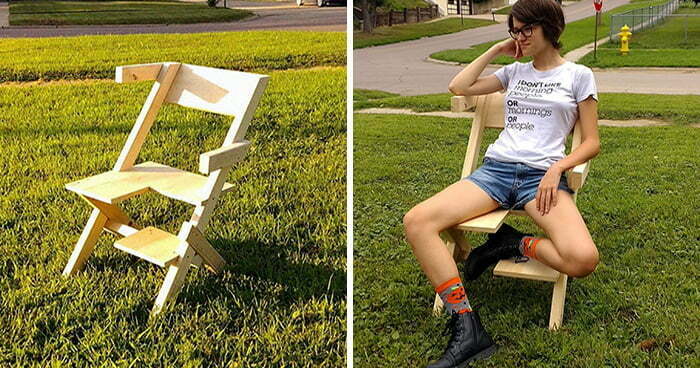 Dad Built A ‘Bi-Chair’ For His Bisexual Daughter, And The People Love It

Few individuals tend to fight their hatred with logic, while others use humor. But have you ever imagined combining both logic and humor to fight for equal rights?

A father has combined both, and the result is brilliant. The dad built a Bi-Chair for his bisexual daughter mainly because she discovered that the stereotype that people, like her, can’t sit normally is quite hilarious.

Designed by Artist Má Matiazi and built by Israel Walker, the chair was tagged “For individuals who can’t sit straight.” It went viral, and the satirical project was also dubbed to be extremely creative.

With Matiazi’s design, Israel Walker built a Bi-Chair for his bisexual daughter

Seeking permission from Artist Matiazi to use her design, Walker’s post on Facebook has garnered over 390 comments, 2,300 likes, and shared over 3,300 times. Anyways, Walker has proven that a modern dad knows how to get the younger generation’s attention.