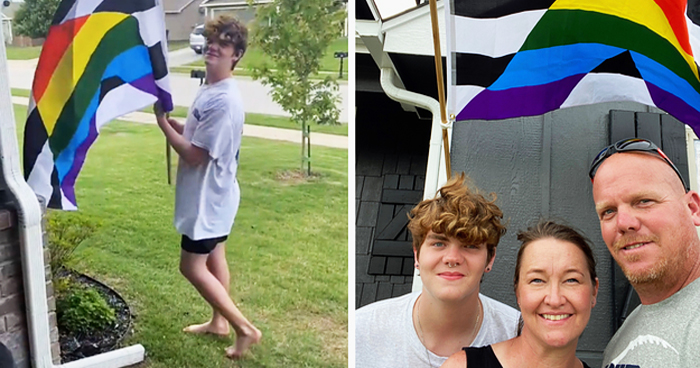 The month of June is popularly known as Pride Month! The celebration is hinged on equality, self-affirmation, and notably on the LGBTQ voices and culture. Unfortunately, there’s a pandemic; still, it hasn’t prevented people from celebrating in the safest way they can. The kind gesture of John Wyatt, 45, is going all viral on TikTok.

Caden Wyatt, 15, is gay, he’s proud and confident because he has his dad by his side.

The dad took to the social media platform and declared to millions of TikTokers about his son Caden Wyatt being gay. Then, for the first time in their neighborhood, John hung a flag outside their house to ring in Pride Month. “We are fixin to shock Oklahoma,” John said in the clip with a background song of Lady Gaga’s Born This Way.

It’s pride month! John celebrated his son Cadena by hanging a flag outside their house.

In four days since it was posted, the video has gone massively viral amid drawing tons of support and heartfelt remarks. Speaking to BuzzFeed News, Caden shared that he’s lucky to have such supportive parents as many other people aren’t as fortunate as he is. The family resides outside of Tulsa in Owasso.

With a background song of Lady Gaga’s Born This Way, John claimed: “We are fixin to shock Oklahoma,”

The flag hung outside the home is the ally flag, and it features a background of white and white stripes.

While they had a conservative/religious mindset before their son came out, it gradually transformed as they observed that their son is possibly gay. “That’s when we started embracing (the community) because we knew our son was gay and at any time he could come out. And he needed to see that we were going to be able to support him and be there for him.” John, in the interview alongside Caden, equally explained.

Caden also has a classic pride flag hung in his room.

The flag hung outside the home is the ally flag, and it features a rainbow letter, including a background of white and white stripes. Caden also has a classic pride flag hung in his room but believes the ally flag will symbolize that his entire family stands with the LGBTQ Community. In an updated clip, John highlighted what the black and white bars represent.

The family has a conservative mindset, but it gradually changed as they observed that their son is possibly gay.

He stated: “The black and white bars represent the heterosexual and cisgender community, the allies, and of course, the rainbow colors in the ‘A’ represent the LGBTQ+ community.” John continued that he researched the flag to ensure he wasn’t promoting something he shouldn’t, adding that he has since got comments from people saying they loved the flag his family chose.