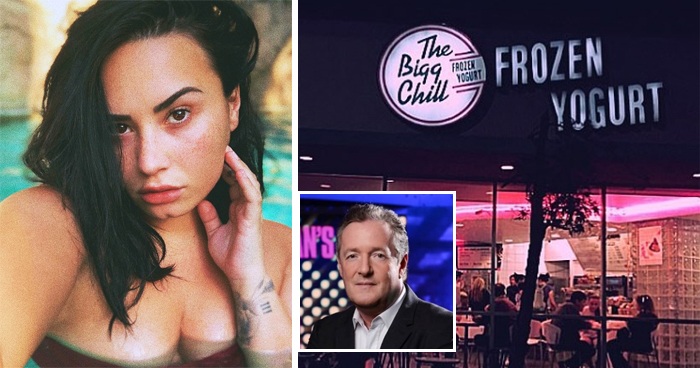 Over the weekend, things went sour between singer Demi Lovato and the Los-Angeles-based Frozen Yogurt shop: THE BIGG CHILL. The 28-Year-Old took to her Instagram story and criticized the yogurt shop for all their diet foods. Lovato claims the offers made it extremely hard to order froyo from them.

“Finding it extremely hard to order froyo from The Bigg Chill, when you have to walk past tons of sugar-free cookies/other diet foods before you get to the counter. Do Better Please.” Lovato said with the hashtags #DietCultureVultures. Lovato fans and, unsurprisingly, Piers Morgan have since reacted.

The 28-Year-Old took to her Instagram story and criticized the yogurt shop for all their diet foods.

Being true to his brand, Piers got involved with Lovato’s drama with the Bigg Chill. Taking to Twitter, Piers urged his followers to read a column he wrote about dumb, deluded Lovato and her vile attempt to bully, shame, and ruin what he named his “favorite frozen yogurt store.”

Unsurprisingly, Piers Morgan has since reacted. He slammed Lovato as dumb and deluded.

In his column on DailyMail, the 56-Year-Old Morgan claimed he was triggered by Lovato, adding that while she may have set out to shame the froyo store, all she did was shame herself. “Who the hell does Demi Lovato think she is? Morgan asked.

56-Year-Old Morgan said Lovato might have set out to shame the froyo store; all she did was shame herself.

He continued: “Well, we know who she is now, don’t we. She revealed herself to be a horrible piece of work who thinks the middle of a pandemic that has crushed so many small businesses is the perfect time to crush yet another, using the full power of her huge social media platform to do it.

“Who the hell does Demi Lovato think she is? Morgan asked.

“I’ve seen some revolting celebrity behavior during the COVID crises but little to rival this for sheer nastiness. Let’s be clear; Demi Lovato wants to wipe out The Bigg Chill because it provides healthy option frozen yogurts for all types of customers, many of whom have medical conditions that necessitate it,”

The Bigg Chill had, have defended itself too, claiming, “We are not diet vultures.

A post shared by The Bigg Chill Frozen Yogurt (@thebiggchillofficial)

It turned out, The Bigg Chill had, have defended itself, claiming, “We are not diet vultures. We cater to all of our customers’ needs for the past 36 years. We are sorry you found this offensive. We carry items for Diabetes, Celiac Disease, Vegan and, of course, have many indulgent items as well.” The dancing with the devil singer didn’t back down, she responded, detailing more concerns.

“We cater to all of our customers’ needs for the past 36 years. We are sorry you found this offensive.”

“Your service was terrible. So rude. The whole experience was triggering and awful. You can carry things for other people while also caring for another percentage of your customers who struggle daily even to step foot in your store. You can find a way to provide an environment for all people with different needs. Including eating disorders, one of the deadliest mental illnesses only second to opioid overdoses. Don’t make excuses; just do better.”

The dancing with the devil singer didn’t back down, she responded, detailing more concerns.

However, Lovato has since shared an eight-minute clip to her Instagram, where she addressed the backlash she had received, apologized for upsetting people with her comments. The singer explained that it wasn’t clear to her that the diet and health food options were for specific health needs, adding that her initial intention was to make a point and call out behaviors or branding things that don’t sit right with her.

In an eight-minute clip, Lovato has addressed the backlash and apologized for upsetting people with her comments.