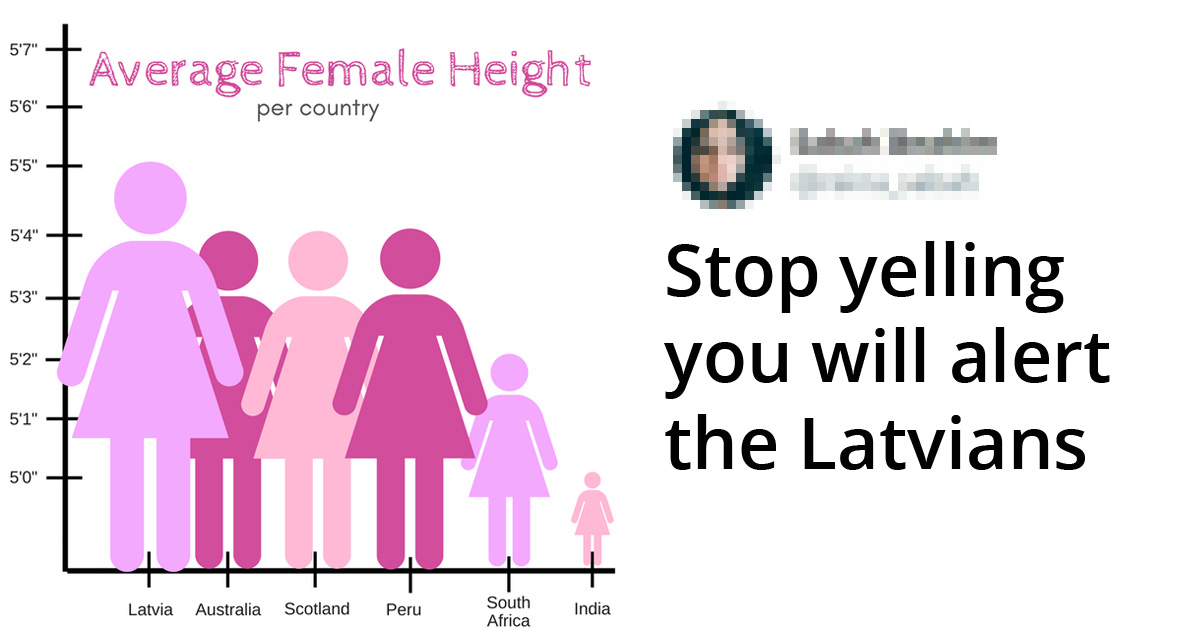 What is the average height of your country’s women? Asian women are typically shorter than westerners and that’s a given. Naturally, Indian women are also shorter in comparison to European or American. So, an Indian woman decided to make a pictogram based on these facts.

The tallest man ever towers over people with his 8-feet height and the tallest woman, Sandy Allen, is at 7 feet 7 inches. But everyone can calm down because the average height gap around the world for women only differs about .5″. Looks quite normal and not much different, right?

The art of making accurate infographics and pictogram has never been as important as this. Data visualization is everyone’s favorite because it’s the quickest way to convey information and comparison at the same time. But only if it was made accurately…

This hilarious graph has led to multiple joking comments from people who now fear for the life of Indian women. Every 5 feet woman in the world is now cowering in fear from the Latvian generals.

If you’re wondering how this chart looks so off, that’s because the y-axis, or the vertical measurement, should be starting off from 0 with same periodical space every 5 inch. The person who made this graph, however, compressed the first 5 inch, causing the difference to look significant. It was simply an inaccurate depiction and use of a pictogram that the media often uses to amplify things the way they want it to.

The photographer and environmental scientist who tweeted this decided to do it for the sarcasm. A simple example how the media loves to play around with their viewers to skew the public’s opinions.

We never knew who was the original maker of this graph. It is quite harmless and in fact hilarious as it made Indian women look so minuscule compared to Latvians when there are only about 5″ of difference between them.

But there is one thing it has successfully conveyed: Latvian women rose as world’s tallest women on average in 2014 at 169.8cm.

The joke continues from hilariously overlapping their own figures onto the chart to referencing to a popular Japanese anime series ‘Attack on Titan’.