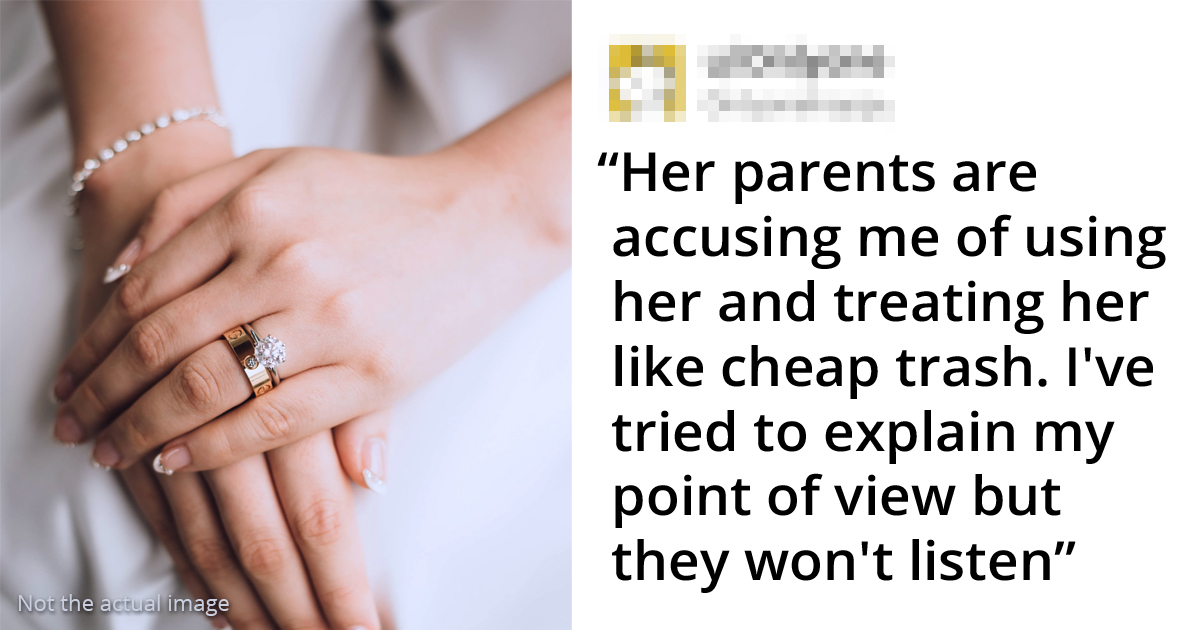 Engagement rings are a symbol of promise, commitment, passion, and true love. Numerous engagement rings are available today, and some are indeed classy, while a few are on the expensive side. But overall are magnificent expressions of love. Engagement rings aren’t forever, so it’s somewhat surprising as to why some bride-to-be get infuriated when their fiancé purchase a cheap ring.

A man from the United States has revealed how his bride-to-be mom, a jeweler accused him of using her daughter and treating her like cheap trash because of an engagement ring. The man with the username aitaringcheap on Reddit claims his girlfriend had initially been happy with the lovely little white gold ring with diamonds and sapphire, but it did take a twist when her mom got involved.

According to the man, his girlfriend has refused to talk to him and is demanding he spends nearly 10% of his salary on a new ring. From his calculation, a new ring from his salary would be sold at $10 -$15,000. ‘My partner and I have been talking about getting engaged for the last year or so. I have quite a good job. I could afford an expensive engagement ring, and if I was following the 10% rule, then I will spend around 10-15K on the ring.’

‘My parents, sister, and nephew all had COVID this year, so I was financially supporting them for a while. My sister lost her job, so I am still supporting her a bit, and my job has announced they will be laying off around 150 people next year, and while I feel confident that I am not one of them, I don’t want to guarantee it either.’ The man explained in a post on r/AmITheA*shole.

He added: ‘I feel like s***tbh, she refused to talk to me, her parents accuse me of using and treating her like cheap trash. I have tried to explain my perspective, but they won’t listen and demand at least a 10% ring. AITA for the ring I bought?’ The man queried. Expectedly, people took to the comment section to express their opinion on the subject matter.

‘Honestly, I think it’s a red flag that she cares so much about the cost of the ring. One wrote while a second added: ‘My fiancé proposed with a family ring so definitely didn’t follow the 10% rule, but he could have proposed with a ring pop, and I would still marry him.’

A few questioned if his girlfriend’s parents’ worries were due to financial concerns, but the man responded by saying it wasn’t the case as he even pays a wage for his fiancée to be a stay-at-home mom. The couple shares a son. Nevertheless, what’s your take on the matter?