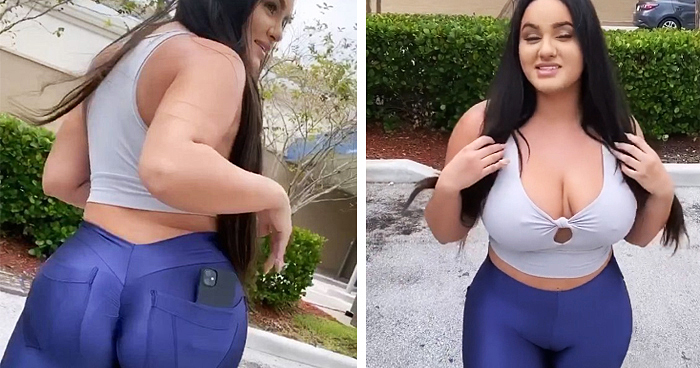 Ever felt someone is watching you? It’s nothing close to being psychic as our brain picks up on cues. The mind is specifically wired enough to inform you that somebody is staring even when they aren’t. Alexas Morgan recently got so curious about people staring at her and indeed embarked on a creative means to getting answers. The beautiful model filmed on camera how many people started at her backside as she walked through Miami, Florida.

Since sharing the now-viral clip to Instagram, the 24-Year-Old caught several men staring at her as she strolls past them. Alexas secretly hid her recording phone in a jean pocket, and of course, it has left her followers startled. ‘I am going to see how many people stare at my b**ty finally.’ Alexas said before tucking the smartphone into her back pocket. As seen in the compiled footage, men turned their heads around as Alexas walked through a bar filled with drinkers and past a supermarket.

Alexas pulled stunt is said to have originated on TikTok but has garnered over 120k likes and positive Instagram reactions. Internet users were left in awe, following the hilarious reactions she caught on camera. ‘Which of these reactions is your favorite? Alexas queried. However, many users admired the last man who was seen peeping from behind a set of trolleys. ‘It’s the last men for me. Dude turned his head a whole 180 to have a glance.’ A user wrote.

Another added: ‘I am presently crying. The last one almost broke his head. Lol!’ One user questioned Alexis on why she filmed the clip, and she responded, admitting it was a dare that needed to be accomplished. Nevertheless, the model claimed it’s not all the video’s characters that got bothered as a few did end up following her.