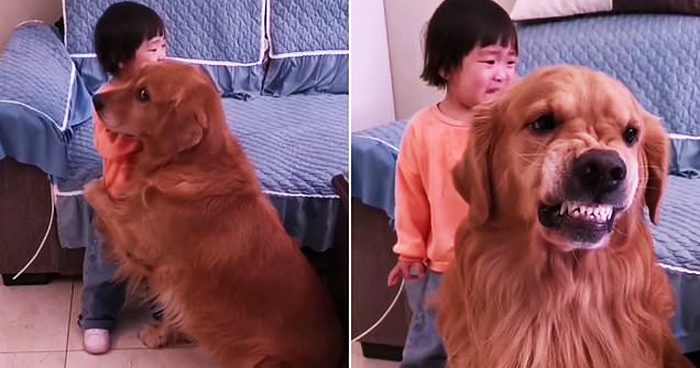 If you’ve ever adopted a Golden Retriever, you know they are downright incredible pets. Aside from being friendly, they’re great with children, gorgeous looking, and extremely loyal. There’s nothing your Golden Retriever wouldn’t do to protect you and this article is indeed a good example.

Just recently, a heart-melting clip showing a Golden Retriever shielding a two-year-old girl with his paws went all viral on the internet. Internet users couldn’t help but talk about Harry, the Golden Retriever’s reaction to a mom who was angered over a ripped facial cream.

Harry rushed to shield his little pet owner ‘Youyou’ from being scolded by her angered mother in the city of Xuzhou, China

A woman, as seen in the clip was scolding her two-year-old daughter named Youyou after realizing that her newly bought facial cream had been ripped open and used. Expectedly, the little girl burst into tears and 5-Year-Old Harry rushed to protect the young owner from being told off.

The faithful pet was also seen snarling at the parent, seemingly telling her to stop scolding the girl. The cute moment was filmed on camera by the pet owner, identified as Ms. Sun, 32, at their residence in Eastern Chinese City, Xuzhou. The owner explained she had bought the cream for her daughter but left it in the living room as she went ahead to prepare lunch.

On returning, she got infuriated seeing that her daughter had teared up the product and played with the tub of the moisturizer.  ‘I was sincerely upset. I just purchased the cream and half of it was already wasted. My baby started crying because I shouted at her quite aggressively. Ms. Sun explained.

The parent’s anger, however, did melt away after sighting the golden retriever reaction. And even while the mother had told him to move out of the way, Harry went on to comfort the young girl by wrapping his legs around the girl and his head on her shoulder. On the other hand, the adorable clip has amassed millions of likes and positive comments after it was shared on Duoyin, a Chinese comparable to TikTok.