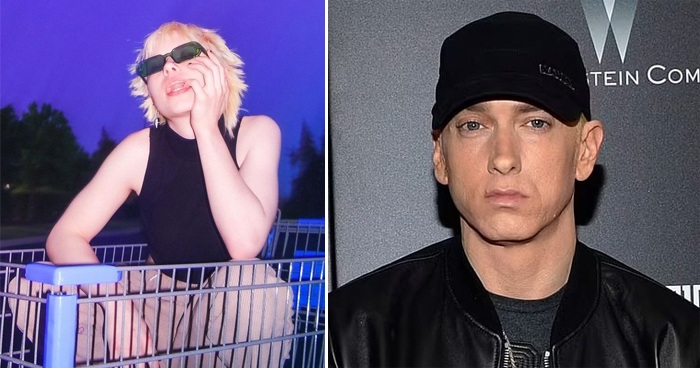 Eminem’s adopted child has come out as non-binary and now goes by the name Stevie Laine. The family of the 19-Years-Old is in full support. Stevie’s revelation of their true identity emerged in a series of Instagram and TikTok posts, where they cut their hair short and showed off a quirky fashion sense.

Stevie Laine has urged fans to now use the pronouns (they/she/he).

The teen, formerly known as Whitney, was adopted in 2005 after Eminem briefly reconciled with Kim Scott.

In the post on Instagram, they wrote out their pronouns: ‘they/she/he. It was liked by Sister Hailie Jade, 25, Eminem’s biological daughter with Kim. A TikTok clip equally showed their transformation to non-binary, a term for people whose gender identity doesn’t sit comfortably with a man or woman.

An audio clip of the teen crying with joy is played at the beginning of the video before a montage of photos highlights their transformation over the years. They wrote in an overlaid text: “Watch me become more comfortable with myself.” Similarly, the clip was captioned: “forever growing and changing” with hashtags #nonbinary and #genderfluid #bi.

“Watch me become more comfortable with myself’ and ‘forever growing and changing.” Captioned the TikTok.

Particularly, the clip began with snaps of Stevie with ‘she/ her’ pronouns captioned.

According to The Sun, the teen’s new name (formerly known as Whitney) was referenced in their grandmother Kathleen Sluck’s obituary in July 2021. It read: “Kathleen was an exceptional mom to her two daughters: Kim and Dawn, and was overjoyed to become a grandmother to her grandchildren; Alaina, Adam, Stevie, P.J. Hailie, Stevie, and Parker.”

Over the years, Eminem has shielded his children from the spotlight.

Eminem had legally adopted Stevie in 2005 after the rapper, 48, reconciled with Stevie’s mom Kim Scott, 46. On the other hand, Stevie had equally come out as a bisexual in 2017, and at this time, their Instagram bio requested to be referred by the pronouns she/they. Their biological father is Eric Hartter, a tattoo artist who passed away from a suspected drug overdose in 2019.