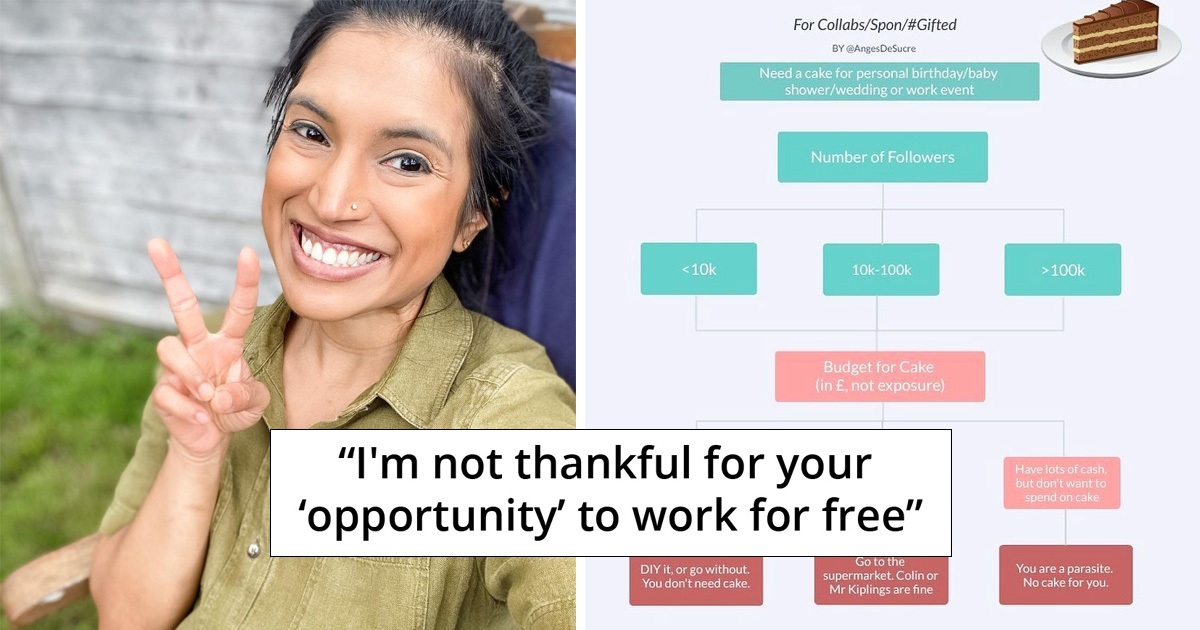 It’s effortless to make fun of Instagram influencers as, in their defense, their lifestyle is the new trend. Influencers are advertisement agents of the modern world, and a lot in marketing agrees that businesses should employ social media influencers’ services. But there’s an issue – numerous influencers online are buying followers to boost their count, and more frustrating are those who beg for freebies in exchange for exposure.

Huge businesses might be able to house a lot of influencers. Still, when you’re working tirelessly to run a business, the concept of getting or having an influencer can be exasperating, a big thanks to their greedy act. Here, a London baker identified as Reshmi Bennett, who has had enough of these influencers, recently took to the internet, sending out a strong message to celebrities, brands, and influencers wanting cakes for their personal or work-related events.

Pro Baker Reshmi Bennett Went All Viral For Her Genius Strategy – A Flowchart. She Had Enough Of The Entitled Influencers And Indeed Hit Back At Them

Reshmi is the manager of Anges De Sucre and has been receiving hundreds of cake applications in exchange for exposure. She has always replied, saying she’s isn’t thankful for the opportunity to work for free. Taking the issue more seriously, the baker shared a flowchart to reveal how expensive cakes are to produce while also using it as a strong point to all influencers begging for freebies.

Specifically, Reshmi had trained in a classical French Cuisine – Ecole Gregoire Ferrandi, located in Paris. She had worked with Michelin starred chefs before launching Anges De Sucre. The combination of flavors delivers top-class hand-decorated cakes; hence influencers aren’t aware of who they’ve been contacting for freebies.

‘A lot of influencers are followed by other influencers. The times I have been swayed into caking for free, I received more requests for free cake. I would rather have you paid for the cake and don’t share it nor tagged than the other way around.’ Reshmi said and dubbed her write up: ‘The Parasite Magnet.’

Reshmi Shared Her Conversation With A Few Influencers

Here’s A Look At A More Detailed One

Anges De Sucre started as a small business, but now it can brag of a shop manager amidst others. Nevertheless, the pro baker admits she’s not a hater of influencers but sees them as braggers running jobs for professional content creators. Besides, do these influencers think begging for freebies is a job that would pay for stuff?