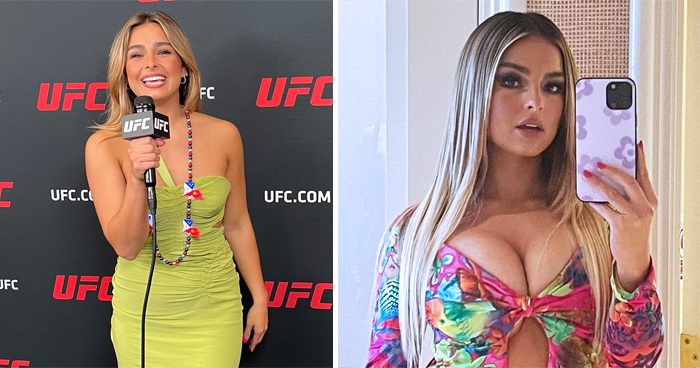 Social media personality Addison Rae was slammed so hard when she joked about getting hired as a UFC correspondent. In a tweet suggesting that she was hired, Addison included pictures of herself in front of the UFC banner.

Addison Rae mentioned studying broadcast journalism in college before she finally dropped out.

Her tweet on her new job has appeared to ignite a lot of rage from others, calling it ‘lame’ and ‘condescending.’

The 20-year-old made it believable with a mirror selfie of herself in a UFC bodysuit complete with the gloves.

In one of the pictures shared, she was seen wrestling with UFC star Miesha Tate and captioned, “I love being little spoon.”

It wasn’t well-received, especially by people who spent much longer studying for the degree but still can’t land a job.

Users suggested that many people invest their life savings for the career, and it was “disgusting” of her to shove this in their face.

One pointed out that it wasn’t about getting the job, but her “distasteful” caption about it.

This user points out how being a famous influencer (Addison has more than 36 million followers on Instagram) is like a fast pass to getting jobs.

The barrage of negative comments continues under her tweet. Many were telling her off how her 3 months could not compare to people who spent years.

There is intense competition in getting the job, and because of this, many were turned off with how the 20-year-old influencer could land a job just like that.

However, news anchor Javonti Thomas had a differing opinion: her big social media following was her legit advantage.

But in a surprising turn of events, Addison Rae gave an update about the “job.”

But hold on, there’s even a bigger twist! Her picture with UFC 264 and the misleading caption… she actually was NOT hired!

An ESPN representative told Insider, “Addison did some interviews with us for UFC 264. However, she is not a full-time employee with UFC.”

Addison’s pictures of her posing in front of UFC 264 show her in the same outfit as when she interviewed Dustin Poirier before his match against Conor McGregor. The reason was that they were from the same city, Louisiana.

So this means Addison was NEVER hired and, therefore, fired from ESPN!