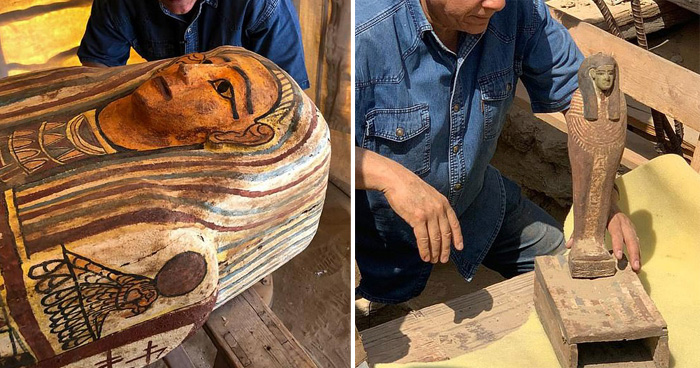 27 Ancient Coffins Unearthed Buried For 2,500 Years In Egypt Could Be Largest Discovery Ever

Scientists recently discovered a total of 27 sarcophagi that were buried 2,500 years ago in Egypt in what is believed to be the largest archaeological haul of its kind.

This incredible discovery was made inside a newly-discovered well at a sacred UNESCO site in Saqqara, south of the capital, Cairo.

The sarcophagi Have Been Buried Underground For 2,500 Years.

A statement released by Egypt’s Antiquity Ministry said: ‘Initial studies indicate that these coffins are completely closed and haven’t been opened since they were buried.’

The find has been hailed by experts as the largest of its kind and the ministry added that they hoped to reveal ‘more secrets’ about the discovery soon.

Alongside The Wooden Sarcophagi, Smaller Statues and Artefacts Were Also Discovered

The statement further reveals that the discovery was made earlier on but the ministry delayed announcing the news until Egypt’s Antiquities Minister Khaled al-Anani could visit the dig site in person to inspect the sarcophagi.

The sarcophagi were discovered by a team digging 36ft down and experts continue to examine it further to try and determine it’s exact history.
Saqqara was an active burial ground for more than 3,000 years and is a designated Unesco World Heritage Site