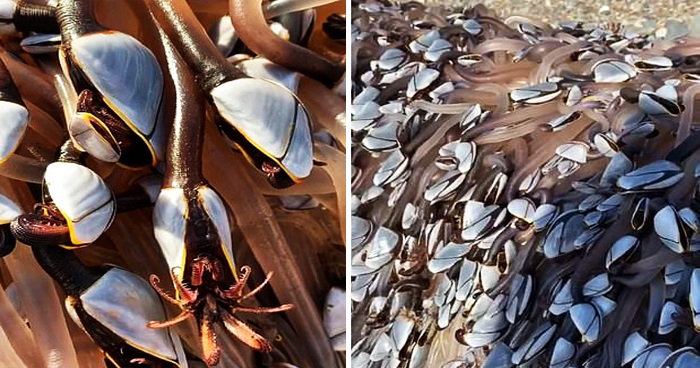 A family on vacation stumbled upon a colony of rare sea creatures washed up on a beach in wales.

Martyn Green, 47, and his family were on a trip to Caernarfon on Sunday when they discovered thousands of bizarre ‘alien like’ creatures clinging on to a large piece of driftwood on the beach.

The family originally from New Brighton, Merseyside, were awed by their find and were totally unaware that they had just landed a descent fortune.

Moments later, after calming their excitement, Martyn’s son did a quick Google search and the white-shelled creatures turned out to be Goosenecked Barnacles, a delicacy that could sell for £25 each.

The whole discovery was captured on camera and the video footage later shared online for the world to see.

At one point the camera zoomed in to show the tentacled creatures contract back into their shells.

This rare species of barnacle are delicacy in countries such as Portugal and Spain where they are known as percebes – which translates to ‘do you understand?’.
Martyn estimates that the total value of the Gooseneck Barnacles could be as high as £50,000.

He said: ‘It turns out they are one of the most expensive sea creatures you can buy.

After discovering the barnacles, Martyn posted a video and pictures on his Facebook page but because of it’s the potential monetary value he decided not to reveal the exact location for fear of opportunists turning up to claim the find.

Seen In A white shell, The Sea Creatures Are A Delicacy In Portugal and Spain

People responded by saying that the barnacles looked ‘like aliens’ while another commented that the discovery was ‘spooky’.

At Their Peak, Gooseneck Barnacles Sell For 360 Euros Per Kilo.