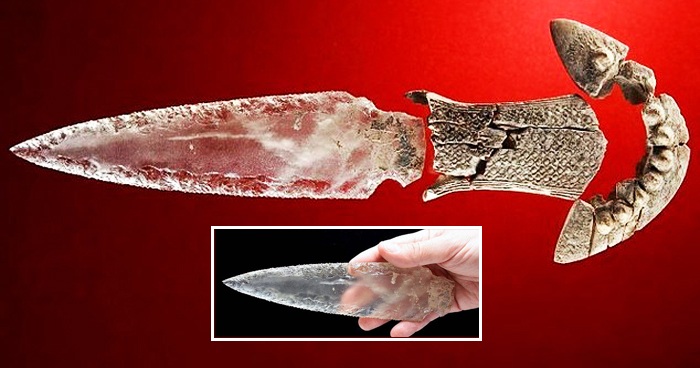 Over time, archeologists end to discover tools left behind by prehistoric civilizations. The majority are made of stone, but a fantastic weapon made of rock crystal has been unearthed in Spain. The crystal dagger dates back to 3000 BCE, and it suspected it must have taken a unique skill to carve.

Found in the megalithic tomb of Montelirio tholos, situated in Southwestern Spain, the dagger is now dubbed the most technically sophisticated weapon. Aged 5000-Year-Old, the artifact is nearly 8.5inches long and was discovered alongside four blades, 16 arrowheads, and a core for making weapons.

Found in the megalithic tomb of Montelirio tholos, the dagger is dubbed the most technically sophisticated weapon

The artifact is aged 5000-Year-Old and it’s nearly 8.5inches long

The megalithic tomb is made of enormous slate slabs, and it stretches over 143 feet. Sitting within Seville’s metropolitan area called Valencia De La Conception Castilleja De Guzman, it was explicitly excavated between 2007 and 2010. But in 2015, researchers from the University of Seville, the University of Granada, and the Spanish Higher Research Council printed their study of the crystal tools on ResearchGate.

Researchers speculate the rock crystal might have a symbolic significance, including connections with ancestors or magical powers

Along with weapons, the published article revealed that the researchers equally uncovered at least 25 individuals, elephant tusks, shrouds, or clothes made of tens of thousands of perforated beads and decorated with amber beads, including fragments of gold blades and ivory objects within the structure.

The megalithic tomb is made of enormous slate slabs, and it stretches over 143 feet

Researchers suggest that the weapons might have belonged to an elite individual who paid a massive price to have the materials sourced and carved. They equally speculated that the rock crystal might have a symbolic significance, including connections with ancestors or magical powers.

16 rock crystal arrowheads were also found in the tomb

The arrowheads were made by pressure-knapping, which involves removing thin flakes from along the edge of a stone

‘They probably represent funerary paraphernalia that is only accessible to the elite of this time. The dagger blade to a handle designed of ivory, also a non-local raw material that must have been of a great value suggests the high-ranking status of the people making use of such objects.’ The study reads.

It added: ‘The manufacture of the rock crystal dagger must have been hinged on an accumulation of transmitted empirical knowledge and skill taken from the production of flint dagger blades as well from the know-how of rock-crystal smaller foliaceous bifacial objects.’ As a result of the dagger’s size, researchers speculated that it must have been taken from a monocrystal of at least 8inches long and two inches thick.

Nonetheless, the arrowheads were said to be made by pressure-knapping, which involves removing thin flakes from along the edge of a stone.

Kourtney Kardashian Responds To Travis Barker’s Ex-Wife After She Called Her A ‘Downgrade’ February 26, 2021

30 Heartwarming Comics About A Dad Teaching His Son Honesty And Kindness February 26, 2021