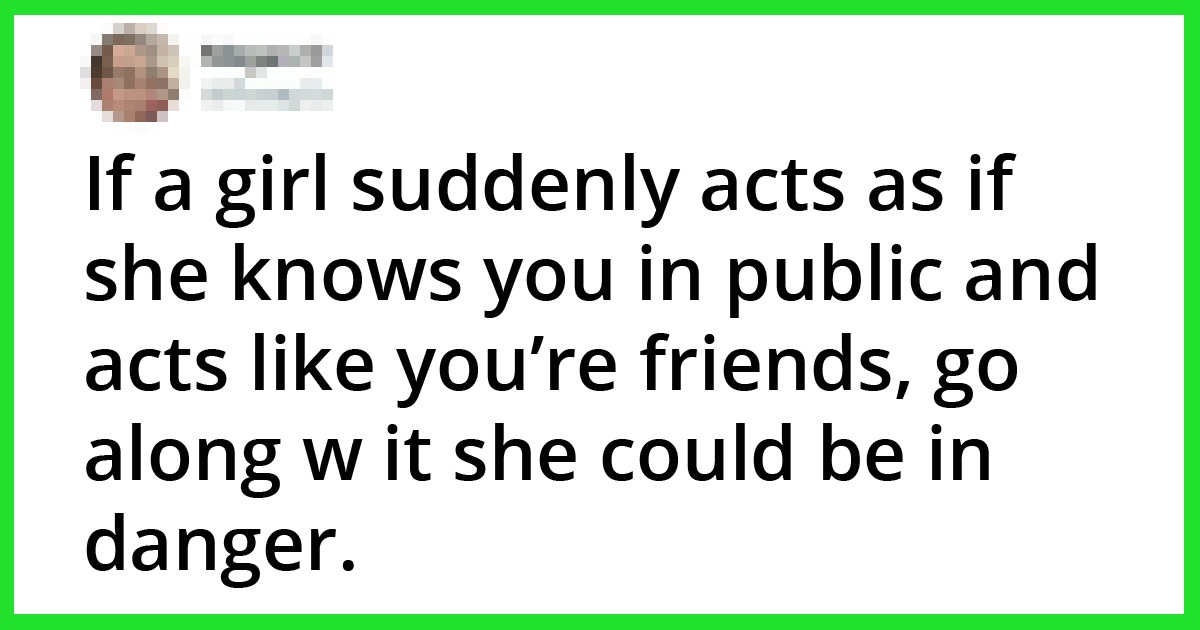 Getting stalked by people at the subway, noticing a creepy dude who won’t leave you alone at the station, literally hyperventilating when you realize you’re outnumbered – these are things women relate to way too well. When you’re a woman, the sheer thought of having a man staring at you nonstop is already a nightmare.

Thankfully, women can be united in helping each other out in these situations, on a Twitter thread where a woman reminded people to pretend it when a girl suddenly acts all familiar with you. Many people shared how this has saved their lives in the past.

A friendly reminder: let the action continues as it may save a life.

Another shared that you can also initiate it if you notice something wrong in public.

Indeed, this is way too terrifying, but it is also the reality that women live through right now. People have the tendency to stay out of people’s troubles and lack the awareness of what’s going on around them with their eyes glued to their phone’s screen. It is easier to be a bystander, but it is so much better to be an interferer or what these women call, a ‘hero.’

More people shared their scary experiences and how random people had saved them.

There are several things women need to remember when traveling alone. The first is to be aware when someone you don’t know appears to be following or staring at you for a prolonged time. Many of these girls noted that they did not even know they were getting followed until a stranger warned them about it.

Remain in crowded places, even somewhere with more than a few people, is enough to deter crimes from happening. You can do several things here: one is to confront the man and ask if they know who you are and call out their stalking. If you are too scared for this, you can follow this tweet’s suggestion to come up to someone and pretend to be friends.

Psychologically speaking, these sexual assaulters and harassers often have very low self-esteem and hate attention. Once they realize people are noticing their presence, there is a very high chance they’ll leave and stop following you. Situations can and will escalate if you let it be – don’t let it get to somewhere you can’t call for help at all!

Reminder to also not share private information without permission!

Asking people who look like they’re in trouble if they’re okay multiple times can change a situation.

This person shared when she and her brother were followed for three whole weeks!

Always remember to take concerns and warnings like this for real. These kinds of things don’t happen twice to most people, and the best you can always do is to prevent them. If these two kids’ concerns about the white van were not brought up and taken seriously, the ‘what ifs’ may have meant they wouldn’t be here to share their stories.

She knew she was followed – then the stalker changed his target. What did she do?

Give attention to people around you! Shoutout to this student who was so brave to get a kid out of a dangerous situation even when she was scared herself.

These conversations can only change if men are willing to listen: like this one.

It’s time that we look at men and say that their crude sex jokes that humiliate women are not okay. We do not entertain catcalling from men just because we’re wearing our summer outfits. It also isn’t cool to sneak up behind a woman who typically scares them – call us out or approach us from the front.