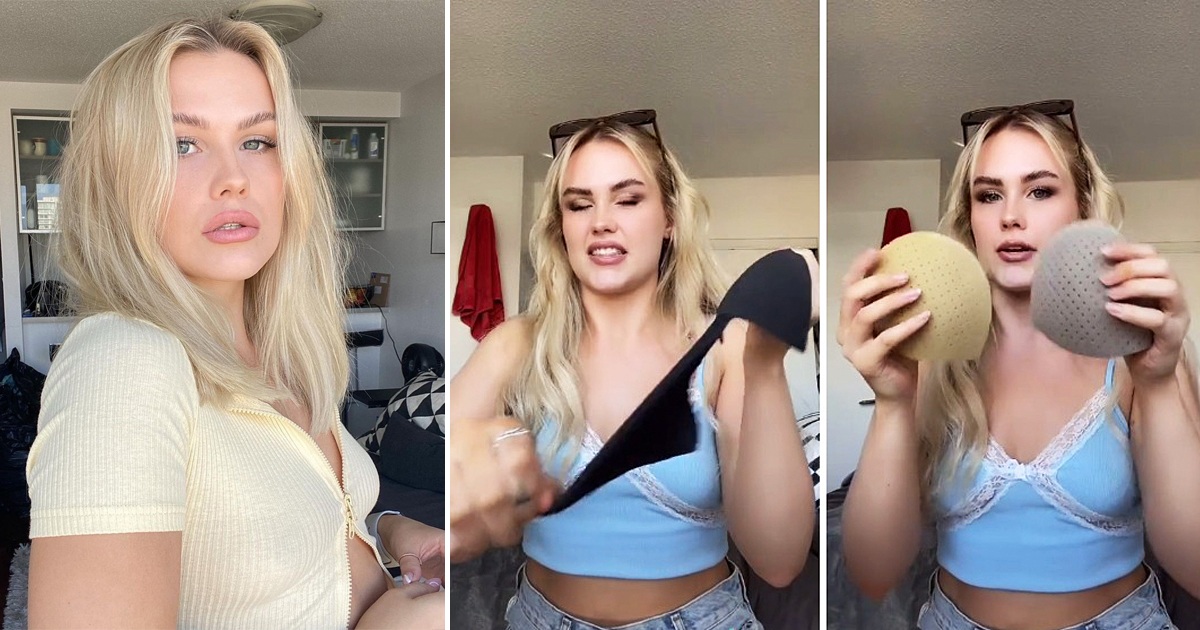 It’s a fact that a lot of popular tops and dresses for summer aren’t bra-friendly. Backless dresses, blouses with loose ties, spaghetti straps, and scarf tops don’t mainly work well with a bra. Well, you sure could wear some sticky boobs underneath or perhaps go with the easy hack of Jazmin Barnes.

Jazmin Barnes’ bra hack has cracked the issue of how to go bra-free in strappy tops while also keeping covered.

Barnes has recently taken to TikTok to share a genius hack for the summer months, which allows her to go bra-free in skimpy tops while keeping covered. In a now-viral clip, the Vancouver-based took out a regular padded insert from an old sports bra and ripped off the silky layer of fabric to reveal the foam underneath.

In her now-viral clip, Barnes ripped off the silky layer of fabric from an old sports bra to reveal the foam underneath.

Barnes then secured the two loose padded inserts under her top without adhesive, as the rough foam gripped the fabric to her top. The 23-Year-Old credited her creativity with being lazy and wanting to free the nip from the confines of a bra. “Honestly, I came up with the idea because I was just lazy one day. One of those inserts fell out of my sports bra in the dryer, and the fabric was starting to peel off of one side.” Barnes, according to The Mirror, explained.

The 23-Year-Old then secured the two loose padded inserts under her top without adhesive.

Barnes credited her hack to being lazy and wanting to free the nip from the confines of a bra.

She added: “So I just ripped off the fabric and stuck it in my shirt because I was too lazy to take the time to out the padding back in the little hole in the sports bra – I’m sure lots of people can relate to that. Then throughout the day, I kept checking to make sure the pad wasn’t falling out, and I realized it was sticking to the sports bra fabric because of the foam, so I tried it on some other shirts and the summer tata hack was born.”

The trick just entails finding an old swimming bikini or sports bra with removable pads, peeling off the bottom layer of fabric, and sticking it onto a top.

The trick is as simple as finding an old bikini or sports bra that comes with removable pads, peeling off the bottom layer of the fabric, and sticking it onto a top. More specifically, the digital marketer claimed she’s proud of her hack because it allows others to save their well-earned cash for other fashion essentials. On the other hand, Barnes advocates for women who get angered with wearing bras every day and with the lumps and bumps that bras can sometimes give.

Barnes advocates for women who get angered with the lumps and bumps that bras can sometimes give.

Her clip has since racked over 5million views and garnered over 800K likes and comments. “Where’s your cape?! You’re saving lives out here.” One person wrote. Another added: “Ma’am, thank you so much for your service to women while a third agreed, saying: “Life changer.” Nonetheless, it’s pretty safe to say it’s an excellent alternative to other expensive methods if you have a backless top for summertime. Or what do you think?

The best thing about this hack is it’s free for all!