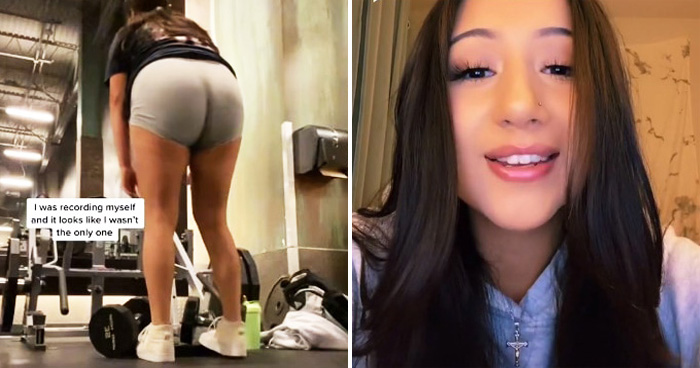 Maria of Illinois US recently visited her local gym for a quick workout and filmed herself during weight training. Sadly, she was left disgusted and horrified to find that a man had secretly filmed her at the gym when she re-watched her video.

Maria was left disgusted after catching a man appearing to film her at the gym.

Sharing the proof online, particularly on TikTok, the stranger could be seen walking into the frame while dropping his duffle bag right behind Maria. He could also be seen holding a phone in his left hand, and his screen seemed to show that he was recording her.

She had filmed herself lifting weights, but her footage caught a man appearing to do the same.

In the video, the man walked into the frame holding a bag and his phone.

During the time, Maria turned around and told the man: “Oh no, sorry, you’re fine.” So far, the 22-Year-Old explained that she was disgusted by the man’s act and admitted that she would confront him if she were not running late for work. Her clip was captioned: “I didn’t notice until I watched the video in my car.”

Upon closer inspection, his phone appears to be filming and showed Maria from behind.

At this time, Maria apologized to the man as she walked over to pick up her phone.

In it, she had stated: “I’m disgusted. I was recording myself, but it looks like I wasn’t the only one. I set up my phone against a machine, and this man walked by, so I thought, oh, I need to move because I was in his way. So I apologized and said, ‘Oh no, sorry, you’re fine. But little did I know he was recording me.”

It was only after rewatching the footage did Maria realized the man’s disgusting behavior.

On November 20th, Maria claimed she reached out to the assistant operations manager, adding that: “We were going to review the footage, which showed the exact time I was working out and the exact time he was there recording me.” She has since received positive feedback from her audience, who told her the manager could revoke the man’s gym membership.

One of Maria’s viewers tried to troll her over the incident, but she did respond:

You really thought you ate – ⁷∞ THE INFINITY CULT

“I work for a gym, all you have to do is take that to the front desk, and they’ll cancel his membership.” One person assured. Another expressed disagreement: “I don’t get it, he recorded you, but you recorded the same thing he recorded and uploaded it to the public. Anyone can download this, and you won’t know.” However, this comes days after another woman experienced a similar incident but at a separate gym.