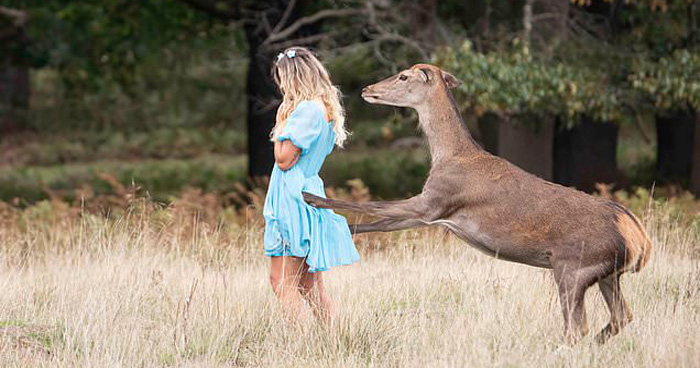 In a bid for a perfect Selfie during holidays to foreign lands, a lot of us place ourselves at risk, including leaning over the edge of a cliff as well as taking photos with endangered animals. The trend is obviously growing, but you might to henceforth think twice before taking a Selfie with a wild animal after reading this piece.

Being exposed to attacks, diseases, and even biting should be a major concern, but in our today’s society, people have chosen to be ignorant. A woman was recently attacked by a wild deer having tried to get close enough for an Instagram Selfie. The incident took place in Richmond Park and undeniably, she risked injury when she posed next to the animal.

The unidentified woman, who reportedly wore a summery blue dress with flowers in her hair amid Autumn weather has, however, been criticized by police officials after the deer pounced on her. The deer had placed its two front hooves on her lower back pushing her hard. Speaking on the subject matter, the Royal Parks Police advised that deer aren’t all adorable and can truly harm people.

‘This photo, captured on Oct. 11 in Richmond Park perfectly depicts why you need to stay 50 meters away. They are wild animals and can bring you serious injury. #WeAreNotBambi.’ Royal Parks Police wrote on their page.

Since shared to the internet, users have equally slammed the woman for her choice of the outfit while a few admitted she doesn’t have respect for nature. ‘Anything for a perfect Instagram feed right. I guess she has a lot of likes so the bruises are worth it.’ A local, who goes by the name, Jennie said.

A second added: ‘It’s so infuriating how many imbeciles get too close enough to the deer in Richmond Park.’ A third stated: ‘Humans don’t learn and a lot don’t have respect for nature. All these for Instagram.’

Nevertheless, Autumn is recognized as the rutting or breeding season for an estimated 1000 free-roaming deer that resides in the Royal Parks of Richmond and since most stags might get flooded with adrenaline and testosterone, it’s best for to keep a safe distance.