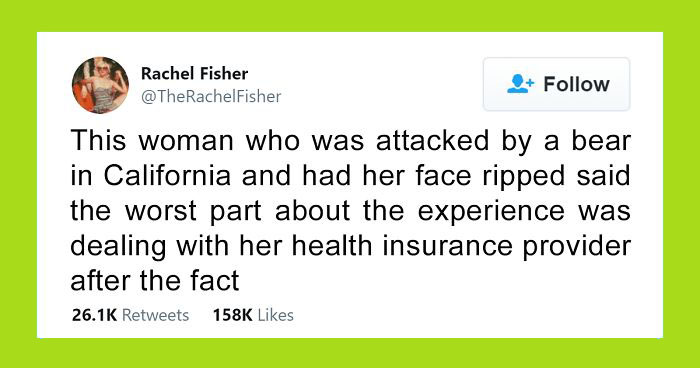 Woman Who Mauled By A Bear, Revealed The Worst Part Was Getting Her Health Insurance

The United States is widely recognized as one of the greatest in the world for some reason, but there’s a factor that can’t be, however, overlooked for its true citizens.

Do you recall when U.S Senator Bernie Sanders asked Twitter Users to upload their most absurd medical bills? There was really a flood warning!

This time around, Green Lemon is covering a sensitive case of a strong woman who recently survived a ghastly bear attack. Sadly, one dreadful part of Allena Hansen’s journey in restoring her original self was dealing with healthcare insurance providers.

Allena, on a subreddit, confessed Blue Cross denied her service and resulted in the brink of despair. It turned out the woman’s insurance company covered only 20% of her total bills, meaning she will have to pay $300K of expenses throughout her life.

The Ask Me Anything Thread

Hansen Gave An Update About The Incident

In 2008, Allena Hansen was walking on her property in the wild when a bear attacked her. She described the ordeal in detail. ‘I discovered I was on the ground and I heard chomp, chomp, and chomp. I felt it went through my skull and it bites through this eye. Hansen explained.

Miraculously, her two dogs named Arky and Decoy came to her rescue and as soon as their barking confused the bear, the woman gathered some strength and escaped.

Hansen Turned To Writing And Shared Her Story