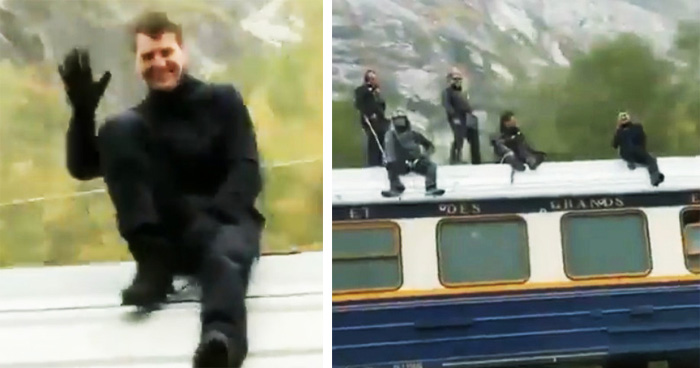 Tom Cruise is one of the most loved movie stars of all time. He has been in the entertainment world for over 30years and has indeed weathered through a lot of controversies. Presently at age 58, Cruise remains talented as he continues to appear in huge-budgeted action movies. Apart from never shying away from doing daredevil stunts, it seems cruise has does have a great sense of humor.

Just recently, Cruise amid filming Mission: Impossible 7 was spotted waving fans from the top of a speeding train. The actor in now-viral footage on TikTok could be seen sitting with his legs dangling off the side of the speeding train in Norway. Onlookers were definitely stunned at seeing Cruise, who has been playing Ethan Hunt since the year 1996.

The production of Mission: Impossible 7 had been suspended due to the global pandemic, but apparently the project is resumed. Alongside Cruise, a filming crew as well as the writer and director Christopher McQuarrie who worked on Jack Reacher, Mission: Impossible – Fallout (2018), and Rogue Nation (2015) were also seen.

Undeniably, Cruise has over time gained a reputation for performing stunts, and indeed the Mission: Impossible Franchise has witnessed the actor involved in numerous death-defying scenes. For instance, Mission: Impossible – Fallout (2018) saw Cruise in a risky Halo Jump skydive. He was the first actor in history to pull such a stunt and he equally did suffer severe injuries while jumping rooftops. He’s, of course, a true risk-taker. Nevertheless, the actor is set to also become the first actor to feature in a blockbuster movie filmed in Space.