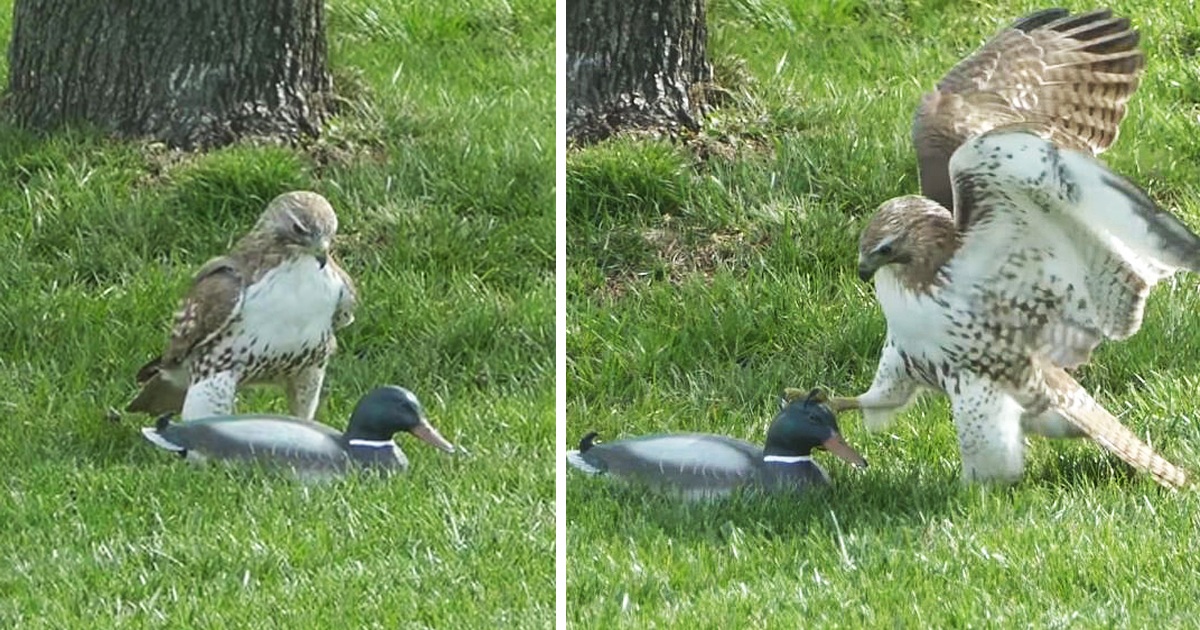 Wildlife can be very ruthless and fierce. But who would have known that wildlife can be very adorable and endearing, too? Like tricking our dog by fake throwing the frisbee or using a laser to make our cat chase the red dot for eternity.

It can happen to hawks, too!

This particular hawk thought he was at luck as he saw a duck sitting quietly there. The duck did not move even when he closes in. At this point, most humans could easily figure out that that’s no duck – that’s just a fake plastic decoration people put on their yard.

The hawk relentlessly launched attack, grabbing its neck and head.

But to the hawk’s confusion, the duck did not react. By now, he also realizes that this is one unusually cold and hard duck. Lunch served for free sitting out here in the cold wouldn’t be warm at all, right?

The video of the confused hawk attacking a fake duck was uploaded on YouTube by Garybob. And by now, it has been viewed more than 2.1m times.

The hawk was visibly confused when his prey did not wince or make a sound. It didn’t react at all!

But for some reasons, the duck just sit there.

The hawk continued to pace around the duck and looked around as if there might be anyone trying to steal his prey. This confusion to the hawk’s sight made him launch one last attack on the weird duck. Before he finally flies off.

Apparently, animals can be fooled by their senses, too! But this hawk only stayed around for 2 minutes before it decided to fly off.

It seems that it has been hard-wired to understand that good prey will run from you and shrill in fear. Not sit there like a literal rock as it gets kicked around. At least a live one won’t do that.

Watch as the hawk looks dumbfounded by the unwavering duck.

That hawk is not alone!

This particular hawk is confused by a bunny decoration on the lawn and slowly approached the unfazed bunny.

Wildlife can be pretty hilarious, too. Don’t believe it? Just check out these crappy wildlife pictures that won their own awards!