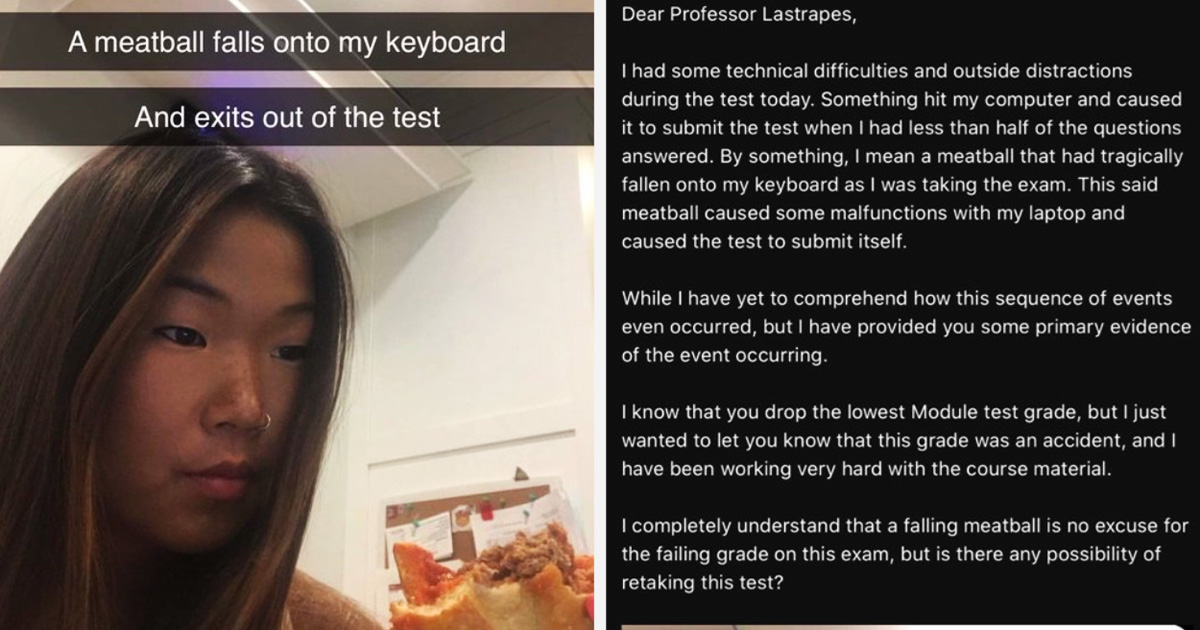 As the world grapples with the coronavirus pandemic, education institutions have had to shift to online lessons as schools in most parts of the world remain closed indefinitely. Modes of Exams have followed suit with learners opting to take their tests on the internet as well.

This digital shift has its drawbacks too as is the case of one College Student who flunked her test After a stray meatball Logged Her Out before she got to finish it.

Sam Lee, 20, a junior at the University of Georgia said she was eating a sandwich while taking her economics test when a stray meatball fell onto her keyboard.

“It hit some sort of escape button and closed the entire browser,” she said.

Lee said she was initially “more worried about her sandwich and compute; that either one of them would be ruined.” But when she realized the browser page she was taking the exam on was no longer there, she really began panicking.

“I then took about six hours to write an email to my professor and sent it later that night,” she said.

Later on, her test results came back at 39%. So she concluded her email to her professor by asking if she could be allowed to retake the test.

To her surprise, her professor responded the next day, and very empathically too.

“Samantha, well, this is certainly a new and unusual excuse for a low score! But for that reason it seems unlikely you’ve made this up,” he wrote in his response. He went ahead to extend her deadline to midnight that very day.

Her professor then cheekily added, “I would recommend you take the test either before or after dinner. :-)”

“I was overjoyed with his response,” she said, and confirmed that she did retake the exam that day, and “did slightly better.”

Lee’s posted the meatball incident and it immediately went viral. While many people were amused by the whole incident, alot of reactions we’re about her proffesor’s generous gesture. However, some people also pointed out that their proffesors’ probably wouldn’t have tolerated the meatball excuse.

“I had surgery the same day as a physics test and when I showed my prof the drs note she announced to the class that she doesn’t allow makeups or early test taking under any circumstances,” one person wrote.

However, there were others who could more positively relate to Lee’s situation.
“Honestly, I am extremely surprised that this went viral,” Lee said. “It’s very ironic to me that my short-lived fame was from a ball of beef, but I wouldn’t have it any other way.”

“Never trust a meatball no matter how trustworthy it may seem,” she added.