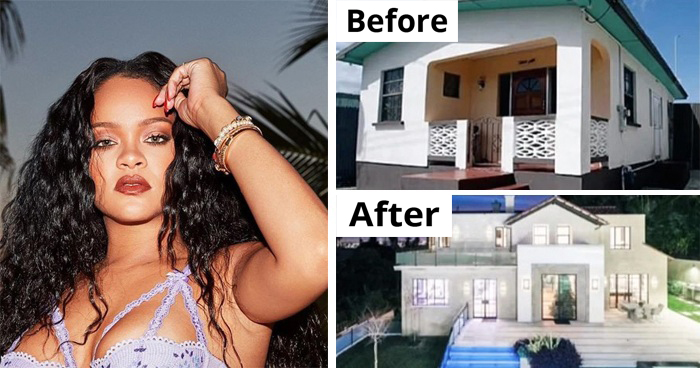 Celebrities might be living in jaw-dropping mansions and envy-inducing penthouses, but these famous beings didn’t, however, always live a life of luxury. Celebrities were once like regular people, and their long journey to success is sometimes overlooked. A small fraction of celebrities were born into fame, while a larger fraction had to work grueling hours to become what they are. You might be shocked that some of your loved A-listers were at a point homeless, but the truth remains, they finally earned it.

Have you ever imagine the first homes of celebrities? If you haven’t, a social media user identified as @CatherineTheCrazy has carried out the assignment on your behalf. In a now-viral video, the TikTok user shared the striking difference between the homes celebrities lived in before and after they attained fame.

From modest homes to gigantic modern mansions, the comparisons are remarkable as well as motivating. The clip has since garnered over 1.3million views as she looked into the former properties of John Travolta, Rihanna, Eminem, Beyoncé, Ariana Grande, and Rihanna.

In all, Singer Rihanna’s transformation is one of the most outstanding. The singer had swapped her little bungalow with a big $6.8 million mansion in Los Angeles. The estate boasted of six bedrooms and even eight bathrooms. However, Rihanna has been spending less time at the three-property after claiming she’s residing in London at the moment. If she eventually decides to lease the property, the new owners will undeniably get a taste of the Barbadian’s luxury.

Rihanna’s Home Before Vs. After

Another incredible comparison was Eminem’s home. Rapper Eminem had traded his humble one-bathroom home situated in Detroit for a mansion he purchased in Rochester Hills. The 5.7-acre mansion boost nine bathrooms, a lake, a pool, a 5-car garage, six bedrooms, and a tennis court. The home, which has now become a hip-hop history, had been featured on the cover of 2000’s Marshall Mathers LP.

Eminem’s Home Before Vs. After

John Travolta, who spent his childhood in New Jersey, had stayed in a modest two-story home with two bathrooms and three bedrooms. Presently, Travolta now lives in an airport he built in Florida, and it features two runways for his collection of private jets.

Travolta’s Home Before Vs. After

Accordingly, Singer Ariana Grande, an impressive childhood having lived in a 5-bedroom mansion in Florida, has traded it for a Hollywood Hills property. The home boasts an infinity pool, 300-bottle wine cellar, a fitness studio, and four bedrooms.

Grande’s Home Before Vs. After

Beyoncé, whose old home was featured in a music video, swapped her three-bedroom property for a gigantic mansion. The $81 million estates feature a home cinema and eight bedrooms. The home also has basketball and tennis courts as well as four outdoor pools.

Beyoncé’s Home Before Vs. After

However, many people were startled by the differences, and indeed it garnered positive comments. ‘Let’s be honest! Eminem deserves everything he has because he worked hard for it.’ A user said. Another added: ‘Who else strives to achieve this someday?