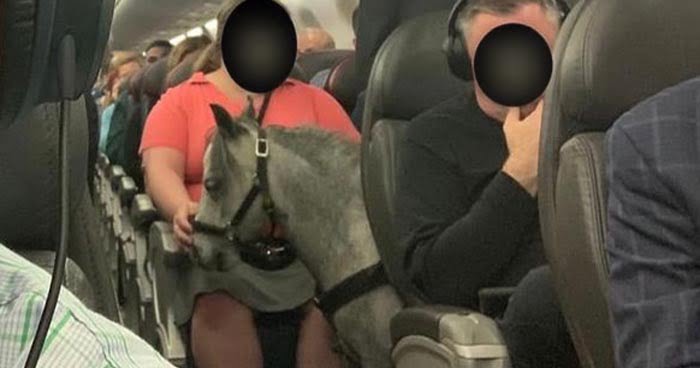 Honestly, some plane passengers can be a thorn in the flesh to share a journey with. From a man who had wedged his socks in the window shutter to a woman who had also dried her knickers using the overhead air vent, a recent photo from onboard a flight has left passengers shocked.

Leading to many uttering things were obviously getting out of hand, the photo shows a miniature horse in the economy cabin of an American Place, standing in front of two-seated passengers.

Reported by the Express, the whole scenario was first shared on an Instagram page: ‘Passenger Shaming Instagram with a caption that reads: ‘Note: This is a legitimate, well-trained service animal used for the blind. It’s not an emotional support animal. They are not one and the same, just an FYI.’

Racking up more than 800comments with divided opinions, some individuals questioned if the image was entirely genuine.

Ignoring that the horse wasn’t an emotional support animal, a user raged saying: ‘This support animal thing is getting out of hand. What happened to dogs and cats. I will be damned if I am going to pay the prices they are charging to fly, only to be seated next to a freaking pony. Well, I so much love horses, but enough is enough!’

A second added: ‘If you really need to fly with a miniature horse by your side, perhaps try out another mode of transportation that will best suit you – Not to mention the community of individuals your needs affect.’

While this particular photo might be fake, miniature horses have, however, been spotted in airports and on planes. On the other hand, some people were positive about the opportunity of sharing a flight with a horse.

One wrote: ‘I would pay additional to sit next to a well-mannered clean, service animal on a plane rather than a human. Service animals are trained and have better mannered than most humans.’

A second wrote: ‘It would definitely make my day if I encounter a miniature horse on my flight!’