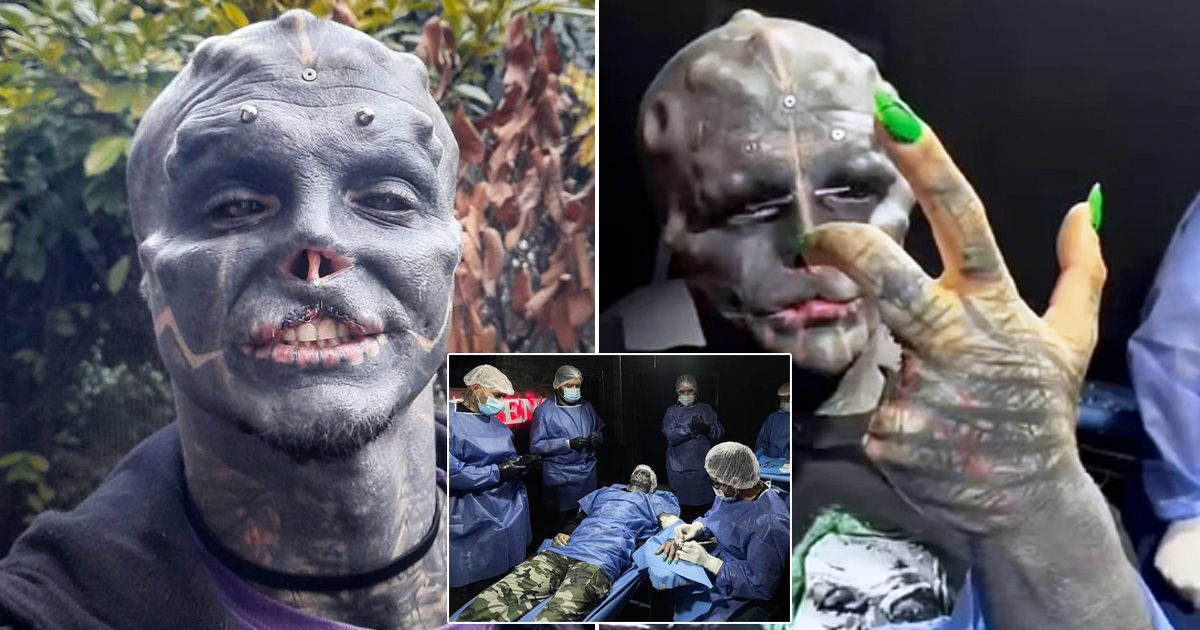 Tattoo and body modification maniac Anthony Loffredo has taken his ambition to become a black alien to a whole new level. The man shocked his followers after showing that he’s cut off two of his fingers to turn his hands into three-clawed fingers.

The 33-year-old Frenchman headed for Mexico to get the surgery done.

Loffredo, however, added that “Project Evolution” is still at “34% loading.”

He captioned his post shared with his 770k Instagram followers, “On the other side of the world to continue my project, the procedure is going well, one more dream that has just come true. Thank you for doing your top job, thank you Mexico from my heart. 34 percent loading.”

The graphic images showed that the man has two fingers removed from his left hand and he has another plan in the near future to remove another two on his right hand.

His extreme takes on body modifications had seen him go through lip and nose removal and splitting his tongue.

There’s a mix of reactions under the post where some were impressed while others were aghast. One user in disbelief wrote, “Oh my god you did it. I didn’t believe it but it’s true. I hope your body will adapt.”

But another read, “Blatant disrespect to those that are unfortunate to have lost limbs and look for ways to function as the human body should.”

“You’re 100 percent going to regret this one eventually.”

Some were a mix of both with one writing, “This is disturbing and fascinating at the same time. I don’t think I could do this, but thumbs up to you for living your dream.”

Many procedures that Loffredo went through, such as lip and nose removals, are illegal in France and many European countries.

He had his nose removal procedure done in Spain earlier this year while he didn’t specify where he got his lips removed. The removal of the top lip had especially made it harder for him to talk, he later admitted. But in a post on his nose removal, he praised a body modification shop, “Now I can walk with my head high thanks to you I am proud of what we did together.”

He has been fascinated with mutation and human body transformations since he was a kid.

In an interview with a French newspaper from 2017, the man recalled his turning point to be in when he was still working as a security guard in his twenties. He dropped everything at 24 and left for Australia. And now, it’s become his normal daily life to make plans to bring his Black Alien project to life.