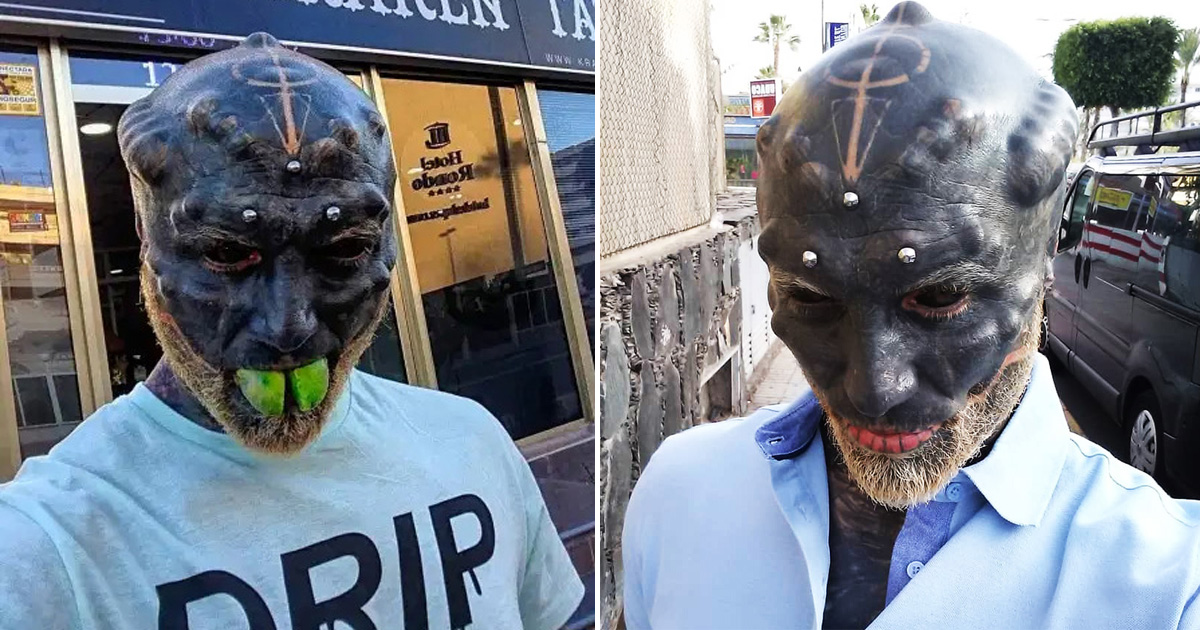 Man Who Turned Himself Into ‘Black Alien’ Has Nose Removed

A Frenchman who had his tongue split and eyes tattooed to transform into a ‘black Alien’ recently went under the knife to remove his nose.

Anthony Loffredo, 32, has also covered himself in tattoos and piercings besides the extreme body modifications to make himself look like a real-life alien.

His latest stint is a procedure historically used as a form of judicial punishment and is banned in many countries.

He visited Barcelona-based extreme surgeon Oscar Marquez for help, since the operation dubbed “rhinotomy”, is illegal in his native country. The surgery has since left Anthony with a gaping hole in his face that he seemed delighted with.

Speaking about his latest surgery, Anthony posted on his Instagram: “Thank you to you @oscarmarquezbodymod you will have marked my life … now I can walk with my head high thanks to you I am proud of what we did together.”

This procedure is one of the many astonishing operations the self-proclaimed alien has undertaken.

He also had both of his ears surgically removed in order to look more extra-terrestrial. He had risked tongue-splitting too which involves cutting the muscular organ in two and braved getting his eyeballs tattooed even though the inkings could potentially leave him blind.

Anthony pushed his boundaries further when he went for dermal implants put in his face – to give his skin a bumpier texture.

In his most recent project, He removed his nose.

He topped the reptilian-style bumps on his forehead with chiseled lines across his cheekbones to complete the horrifying look.

Despite his once dashing looks pre-surgery, Anthony doesn’t regret his transformation.

Anthony looks completely different compared to his former self.

In 2017 he told French newspaper Midi Libre: “From a very young age, I have been passionate about mutations and transformations of the human body.

“I had a click when I was a security guard. I realized that I was not living my life the way I wanted. I stopped everything at 24 and left for Australia.”

“It has become normal, even unconscious, to constantly think about my plans for the next few months.”

He added: “I love getting into the shoes of a scary character.

“I often settle down somewhere and play a role, especially at night in the dark streets, he has fun.

“I explore the contrast between the role I play and myself.”