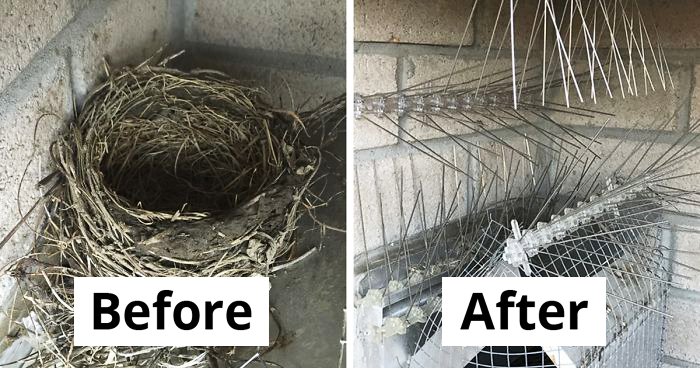 Man Shares Hilarious Pics Of His 4-Year Battle With Birds

Birds are naturally fantastic! Their colors are outstanding, they make incredible tones, and of course, they ensure to add a sense of nature to whatever location they find themselves. But are you aware of the struggle they have with humans? Building nests in homes has remained quite infuriating for many people, but it appears birds continually get to win.

Recently, a man startled everyone with his fight against some fathered intruders. The battle has lasted for four years, and we can’t tell if it’s over yet. @atomicrabbit2 on Imgur had first spotted a few birds hiding from the cold night and thought nothing of them.

Sooner than expected, he found himself battling these birds who regularly make their nests on the exhaust of a cozy gas heater that was tucked in the corner of his lovely new house. The war emerged, and @atomicrabbit2 began using some basic bird blocking techniques. Photos of the 4years tussle have been shared, and it shows just how determined the birds were to make a home the Imgur user’s home.

‘My 4-Year (Ongoing) Battle With Birds’

No matter what @atomicrabbit2 did to block up holes and even cover up their exhaust pipe, the pigeons always triumphed. ‘So we bought a new house. This house has a nice gas fireplace, and the exhaust was tucked away near the back door. The problem was, the little nook appeared to be a perfect place for birds nest because of the protection of the roof and heat from the fireplace.’ The user said in his post.

August 2014: ‘The first time I noticed the little guys, they caught me off guard but thought nothing of it. They were trying to keep warm, I figured. They started easily and flew away whenever I would walk in/out of my back door, which scared the s**t outta me. At first, I ignored it, but they started shitting and building a nest inside the exhaust.’

March 2015: Next spring, I decided to wrap the exhaust in chicken wire (Iteration 1). I was proud of the tidy, little wrap I did, patted myself on the back, and figured that was it.’

May 2015: ‘Apparently, it wasn’t. They found a nice little crevice on top of the exhaust to build a neat, little nest. OK fine. No babies, so the nest is gone. Easy enough.’

‘The bird came back the very next day. I cleared it out, and they didn’t seem to come back for the rest of the season. Awesome!’

‘OK, this is getting f**king annoying. So I added bird spikes on top (Iteration 2), which I figured would keep them out for good. NOPE. Those little f**ks came back with a vengeance. It not only didn’t keep them away, but spikes seemed to stabilize their nest. This time they brought colored twine! I cleaned out the nest the next day; they came back with more blue twine. I cleaned it out, and they came back again with more Goddamned twine. They must have had a f**kin stockpile somewhere.’

‘Wrapped the entire opening at the top’

May 2018: ‘What the absolute f*CK?! HOW?!! So apparently, I left a small opening on the right side. Those birds were flying up into their now high-end GATED F*CKING COMMUNITY!’

May 2018: ‘Meet Dr. Who. He scared the hell out of those birds, and they haven’t been back since’

July 2018: ‘Closing the gap on the right side for good measure. They gave me a run for my money, and it’s not pretty, but after four years, lots of bird shit, and six iterations, I think this will be the final one. If I see them back next year, I may give in and try to charge them rent.’