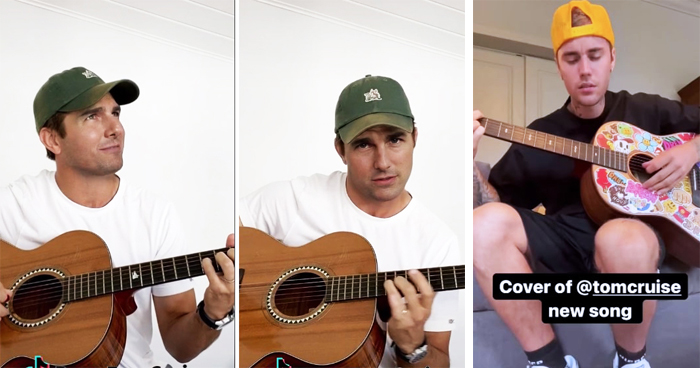 No human has immunity over being fooled! And just recently, Justin Bieber found himself as the victim. The popstar was tricked into challenging Deepfake Tom Cruise. Sharing a video of Cruise playing the guitar on Instagram, Bieber tagged the Hollywood star and wrote: “@tomcruise I’m impressed with your guitar skills.”

Justin Bieber recently tagged Tom Cruise’s page with a clip of a deepfake of the actor playing the guitar.

He also challenged him to a fight, saying: “But you could still catch these hands, my boy.” On his Insta stories, Bieber referenced their still unconfirmed boxing match, saying: “While ur playing a tune not giving a damn, I’m over here thinking about this first-round knockout.”

The pop star didn’t realize it wasn’t the actor and challenged Cruise to a guitar playing fight.

He then shared a story of himself covering the Deepfake Cruise’s performance before it appeared that someone on his team gave him the heads up that he had been going back and forth with an Artificial Intelligence. He again posted: “That’s not really Tom’s Cruise? Lol, oh well, still hilarious.”

Well, it was a hilarious moment when Justin realized he had challenged Artificial Intelligence.

Despite looking uncannily realistic, the person in the clip initially posted by the deeptomcruise account wasn’t actually Tom Cruise but a digitally manipulated Deepfake version of him. The page is managed by Chris Ume, a visual effects artist from Belgium.

The page is managed by Chris Ume, who mapped out Cruise’s face onto a body of Miles Fisher.

Chris uses machine-learning artificial intelligence to map out Cruise’s face onto a body of Miles Fisher, the impersonator. This allows him to show fake Cruise doing everyday things like waiting for a flight at the airport, among others. Since emerging on TikTok, the clip has garnered millions of views and reactions.

However, there has been an increasing warning that  Deepfakes can manipulate people’s views.

However, experts have continually warned that increasingly realistic Deepfakes can manipulate people’s views into thinking they see something real. A recently conducted research by Sensity AI showed the figure of Deepfake videos has since doubled every six months since 2018. Significant attention has been given to the deepfakes of politicians and celebs, but the majority target women.