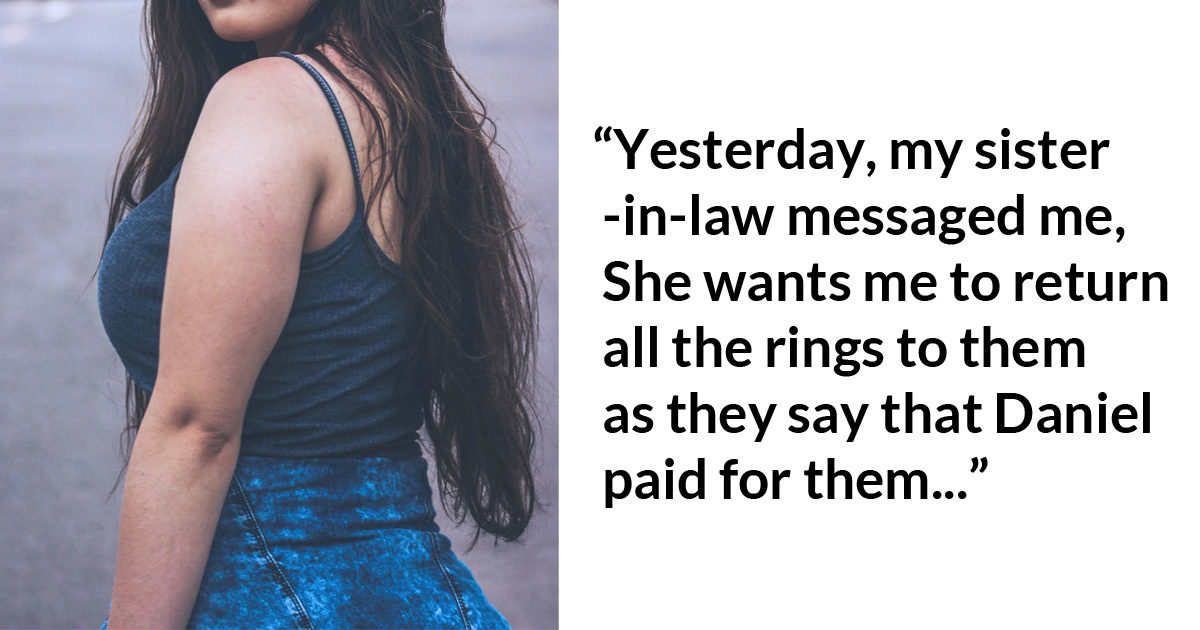 It can be unbearable to grieve over the loss of someone loved dearly. Notably, a person can hit rock bottom if it’s a spouse they lost. This is precisely what one woman is experiencing, and in between, she’s presently faced with pressure from her in-laws to return the rings her now-deceased husband gave her.

Despite the pain of losing her husband, a grieving wife is faced with an unreasonable demand from her in-laws.

Taking to the situation to Reddit, on the popular AITA Community, the anonymous woman shared her predicament and urged members of the Subreddit for advice while asking if she was in the wrong. The woman explained that she and her husband, Daniel, were married for 1.5years but together for seven.

Her in-laws: Daniel’s mother and sister, are harassing her to give them her wedding rings.

“I received an engagement ring, wedding ring, and eternity band from him (a wedding anniversary gift for 1yr married). It still doesn’t feel real, but I’m trying to live life the way he’d want me to every day. I hadn’t had much contact with his family since the funeral six months ago. I suppose we were all hurting and needed to heal.” She said.

The woman had received an engagement ring, wedding ring, and eternity band from her husband, Daniel.

Just recently, her sister-in-law contacted her! She added: “Yesterday, my SIL messaged me on FB. I’m a bit of an oversharer on FB, and they knew about my eternity ring as well as the other rings. My SIL wants me to return all the rings to them as they say that Daniel paid for them and because he has died, they belong to the family.”

She hasn’t had much contact with his family since the funeral, but recently her SIL reached out on Facebook.

The woman claimed she had already given them back his childhood stuff along with some photos. However, she’s unwilling to part with the two of her rings as they’re profoundly sentimental and were gifted by her late husband.

“My SIL wants me to return all the rings to them, as they say, that Daniel paid for them, and because he has died, they belong to the family.” The woman explained.

“I’d be ok with giving them my plain wedding band, but the two others are beautiful, expensive (combined 19K) and remind me of the best time of my life. I’d give them my husband’s wedding ring, but he was buried wearing it. I’m getting squeezed by his family to give them these rings. I don’t know if they just want them to sell or own or what.” The grieving wife stated.

She then explained that she doesn’t want to return the rings as they are “deeply sentimental” to her.

She revealed her in-laws have been calling her names to keep them out of the family where they belong. The post concluded with: “Daniel and I didn’t have kids, so I suppose I’m no longer family.” Fortunately, the community supported the OP’s decision and claimed she wasn’t wrong for not wanting to hand over the rings to her in-laws.

However, OP has since been threatened with legal action if she doesn’t return.

One person wrote: “I’d cut all ties with these people. Let your AH SIL get a lawyer; it will be a waste of her money because those rings are YOURS; they were gifts.” Another said: “Asking for a widow’s wedding rings six months after losing her husband is deeply messed up.” A third insisted: “You are his family. You are his next of kin. He bought the rings for you. He gave the rings to you.”