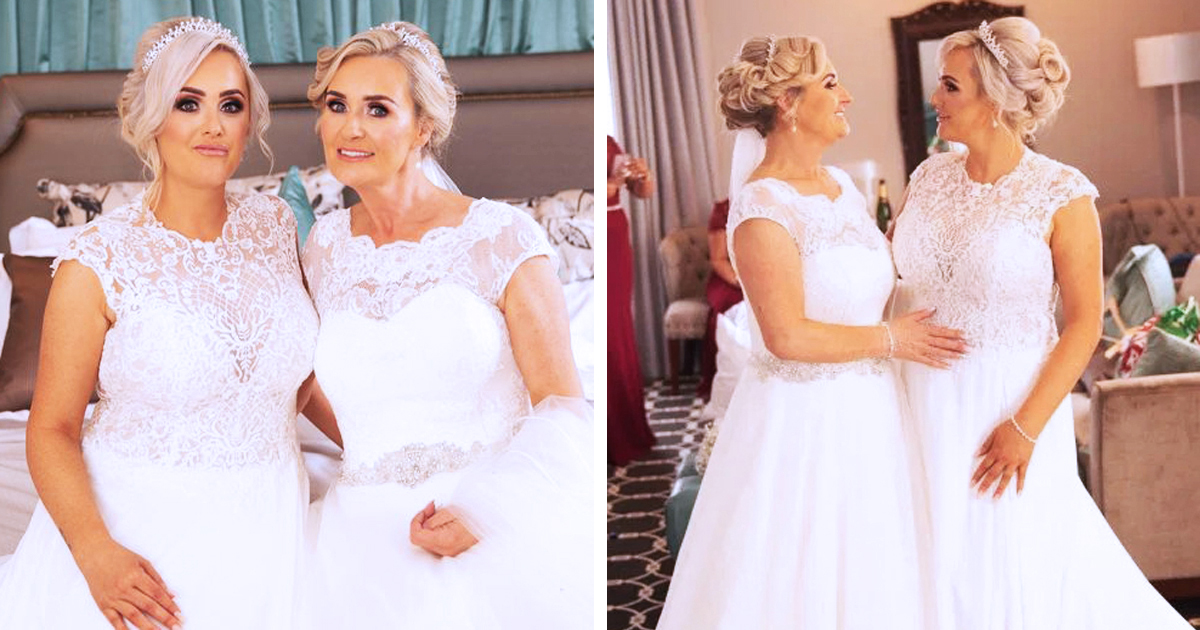 In a day of ‘me too’ where brides are always questioning every single soul that wears something that is remotely close to white if they’re trying to upstage them, a certain bride thought it was the best day ever to wear a wedding gown with her mom. Aisling Cislikauskiene, 35, was getting married on the same day as her mom, Trisha Duffy, 53.

Held on Valentine’s Day, Trisha and Aisling were the best of friends they’ve had in their life. They two vowed for lifelong love to their partners at Castletroy Park Hotel in Limerick in front of 160 guests. Trisha to her now-husband Joe Fitzgerald, 71 and Aisling to Marius, 38.

Aisling revealed that it was her mom who suggested the idea first. “I thought she was joking,” said the daughter. “Marius and I told her not to be silly and said we wouldn’t want to gatecrash their big day.”

“But the more we spoke about it, the more it seemed like a good idea. We get on so well as a foursome and are always going out for dinner and spending weekends together. We ended up thinking, ‘Why not?’

“We knew we could both save a lot of money by having one big wedding and it would be easier for all of our guests coming to one event — rather than two. It was the best day ever and it felt so special to share it with my mum.”

Aisling and Marius met 8 years ago in a club at Limerick. They have been blessed with two children, Amelia and Isabelle, both 3 and 4 years old, as well as 3 other children from their previous relationship. Aisling was a mom-of-two to Kellie and Keelan who are now 15 and 9 years old. While Marius is a dad to daughter Gabrielle, 15.

Marius popped her the question by surprise in 2016 in front of her friends. Aisling recall that moment, “Although I was mortified when Marius proposed in front of everyone, I was soon very emotional. He melts my heart as he is very romantic.”

The next year, it was Trisha’s turn to find the love of her life. Her friend introduced them to 71-year-old retired worker Joe. Aisling said, “We all took to Joe straight away — he’s very good to the whole family, as well as my mum.”

Joe proposed to her in early 2019 and on that same year in October, Trisha made the suggestion that they should celebrate their happy day together. After all, her daughter has been by her side all the time throughout her preparation for the wedding.

Four months before the wedding!

Aisling’s mother said, “Aisling has been there with me since day one — from the surprise engagement in Amsterdam to the amazing hen do she gave me, and all the planning for my special day. I loved the idea of them sharing our wedding. It was going to make an exciting day even better.”

The mother-of-six said she’s willing to “do anything for my children” and her daughter considered her suggestion and finally agreed.

Because it was an event that Aisling gave her all in preparation for her mom, her joining it simply meant they had more guests to add to the list and another wedding gown to prepare. She shared, “Mum bought the dress for me. We were so happy. We walked home together holding our dresses.”

What made things even more magical was that her psychic medium, Elaine Maher, told her that there was going to be a double wedding just last year. She never thought it was going to be her own with mom!

Their guest list was not so hard to make either since there were a lot of mutual friends between them. But the only people who knew that it was going to be a double wedding were the groomsmen, bridesmaids, and Marius’ parents who had to fly from Lithuania.

Aisling recalled how the wedding reception went on, “Mum and Joe went in first, and when they had finished they asked everyone to stay, as she had a surprise.”

“And then in I walked,” she continued. “Nobody had suspected a thing. They were all shocked, but so thrilled for us. What could have been a very stressful occasion was easy and thoroughly enjoyed by everybody who was there.

The two pairs later went on a honeymoon together as well on a cruise that sails around Spanish islands for a week. Aisling and Trisha now can only get excited every year for their joint anniversary and closer than ever relationship as mom and daughter!