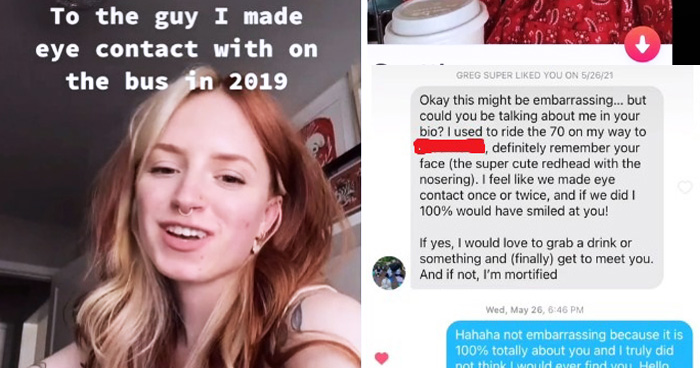 ‘I Made Eye Contact With A Bloke On The Bus, So I Searched For Him On Tinder, Now We’re Dating’

This is a modern love tale, one you wouldn’t want to miss! Seattle Sims, 24, recently took to TikTok to share how she tracked down a stranger she made eye contact with on a bus. The designer from Seattle, United States, explained that the stranger caught her eye on public transport on two different occasions.

Seattle Sims, 24, revealed how she had tracked down a stranger she made eye contact with on a bus.

So following the brief encounters, 24-Year-Old Seattle embarked on a desperate search for him on Tinder. “I made eye contact with and smiled at a guy on bus 70 in November 2019 and again in January 2020.” Seattle wrote on Tinder profile. She added that if he’s reading, he should hit the ‘super like’ button.

The encounter happened twice: In November 2019 and in January 2020.

Fortunately, the man named Greg stumbled upon Seattle’s profile and did write back, saying: “OKAY, this might be embarrassing, but could you be talking about me in your bio?” Greg added that he had also clocked the super cute redhead with the nose ring.

Seattle launched a desperate search on Tinder, and luckily she found the man named Greg.

In response, Seattle revealed he was 100% the guy she had been looking for, and as expected, the pair decided to get a drink. The pair’s first official date was revealed in an updated clip to have lasted eleven hours, the second lasted nine hours, while the third again lasted eleven hours. To indicate that they’re now official GF and BF, Seattle said: “Needless to say, we like hanging out.”

Seattle and Greg are officially Girlfriend and Boyfriend. This Video Is Proof:

The heartwarming clips have garnered positive reactions, but the first clip, in particular, amassed over 64K likes and was watched over 300K times. “My God, what a fairytale.” One person wrote. Another added: “The best relationship story I’ve ever heard in my life.” A third stated: “OH MY GOD, MAKE A MOVIE.” While a fourth said: “The plot of a rom-com.”