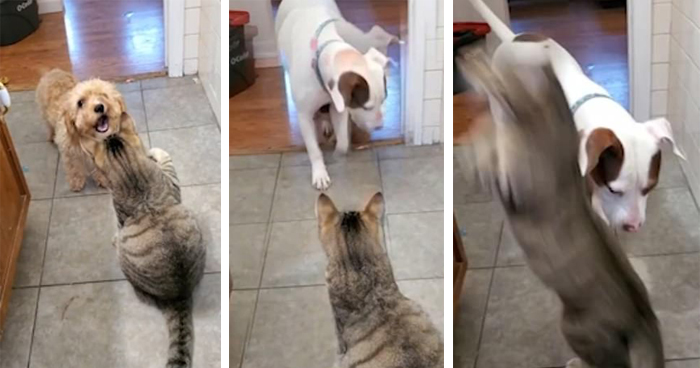 Nobody likes getting bullied, not even puppies! Louie the Cavapoo is 4-month-old and wanted to play with his cat friend, Marvin. But apparently, Marvin was not in the mood to play nice and used his paws to quickly hit on poor Louie’s face. Before this, Louie could be heard squealing when Marvin did a headlock on him, making him let go of his grip.

Still wagging his tail, Louie felt intimidated by the hits and moved back. The woman who was filming the video could be heard saying, “You started it.”

The dog looks dejected from its back as it stopped to sit for a while and then walked back into the room. The owner asked the cat, “Marvin. Marvin, did you have to use the claws?”

But a few seconds later, another bigger pup showed in. Leela, the one-year-old brown-spotted white dog, strutted into the room as Marvin pushed her in. It was as if dominance was exerted. Marvin quickly jumped up on the counter after seeing Leela walking into the room, now standing on Marvin’s spot.

It was so funny to see, the woman commented, “Oh yeah, he brings in the big guns and you run!”

Louie definitely looked very proud of what he’s done. He now gets to pass the room freely as Leela occupied the majority of the lower level. Marvin looked interested in the sink as he jumped out of the way.

Leela won the battle against Marvin for Louise!