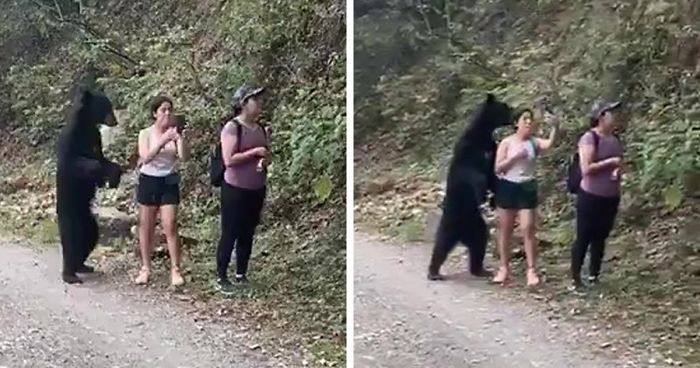 This is the most frightening moment a black bear approached a group of hikers in Mexico. Keeping their cool, a giant black bear was filmed standing up on its hind legs to sniff the hikers, of which the clip is going all viral at the moment.

The heart-aching footage filmed at a well-known hiking region at Chipinque Ecological Park in San Pedro Garzaa Garcia featured a woman who was bold enough to lift up her phone to click a quick Selfie with the bear.

After sniffing the woman, the bear was then spotted dropping to the ground but still didn’t move away, but instead attempted to bite the women’s leg and paws at her countlessly. Fortunately, it lost interest and moved away gradually.

Shared to Twitter, the incident has been analyzed from different angles and has undeniably gone viral, garnering millions of views. A lot of Twitter users did observe that the bear looked all tame and appeared more curious than aggressive. A few, on the other hand, found the whole situation as a dangerous one.

Nevertheless, it’s advisable not to risk one’s health for a selfie with bears. And issuing a piece of advice on the subject matter, the government of Nuevo Leon highlighted the need to stay calm and never come in between a baby bear and its mother. Accordingly, it was advised photographing, taking selfies should be avoided, and importantly feeding a bear is no option.