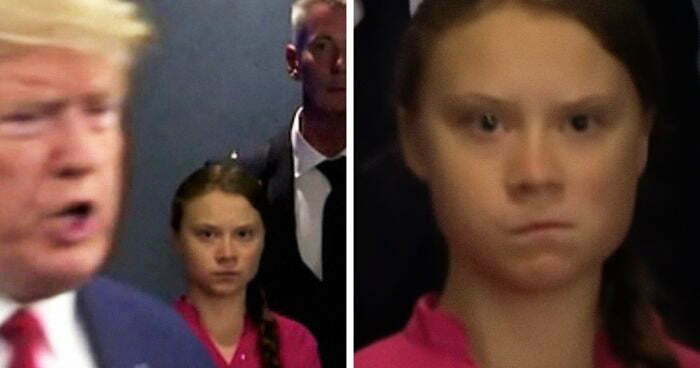 When society should be letting kids build their dream and imagination as high as possible, Greta Thunberg who has to give a speech during the UN’s Climate Summit mocks how society is pushing the responsibility to them.

“I shouldn’t be up here. I should be back in school on the other side of the ocean,” she clearly said on the podium, stunning quite a number of people who may have seen and heard it live or through their TV screens.

The brave girl continued, “Yet you all come to us for hope. How dare you. You have stolen my dreams and my childhood with your empty words. We are at the beginning of mass extinction and yet all you can talk about is money. You are failing us.”

But the President of the United States had the time to sarcastically mocked the bravery of the girl, tweeting: “She seems like a very happy young girl looking forward to a bright and wonderful future. So nice to see!”

Anger clearly flashed Thunberg’s face as Trump upstaged her entrance with flocks of news reporters around him. The latest summit has been focusing on confronting global warming and reducing fossil fuel emissions.

Trump was not scheduled to attend, yet, he was there for 15 minutes. Thunberg was not amused.

She should be ‘back in school’, studying and looking at a better future.

Thunberg unleashed her anger and passion in her speech, feeling emotional as she voices her concern of the future, “There will not be any solution or plans in line with these figures here today because these numbers are too uncomfortable and you’re not mature enough to tell it like it is.

“You are failing us. The young people are starting to understand your betrayal. The eyes of all future generations are upon you. And if you choose to fail us, I say, we will never forgive you. Right here, right now is where we draw the line. The world is waking up and change is coming whether you like it or not,” her speech ended with a splendid round of applause.

“You come to us young people for hope. How dare you?”

“You have stolen my dreams and my childhood with your empty words, yet I’m one of the lucky ones.”

“People are suffering, people are dying, entire ecosystems are collapsing.”

Trump, with a disinterested look, took his time to shut his eyes for the 15 minute he was there.

He also seems to be preoccupied.

The summit convened by UN Secretary-General Antonio Guterres was titled ‘A Race We Can Win, A Race We Must Win’. One of its aims is to push the end of a new coal plant construction by 2020.

In the same spirit as Thunberg’s, Guterres praised her enthusiasm and added, “My generation has failed in its responsibility to protect our planet. That must change. The climate crisis is caused by us, and the solutions must come from us.”

People are loving how Greta managed to burn adults at the UN Climate Summit.

She further filed complaints about countries that have not acted against the climate crisis. They are: Germany, France, Brazil, Argentina, and Turkey.

Greta speaking to German Chancellor Angela Merkel after her speech.

She was also part of the New York’s Global Climate Strike demonstration.

She traveled to the US by yacht to avoid flying as she was nominated for the Nobel Peace Prize.

‘Our House Is On Fire’. Have you done your part?