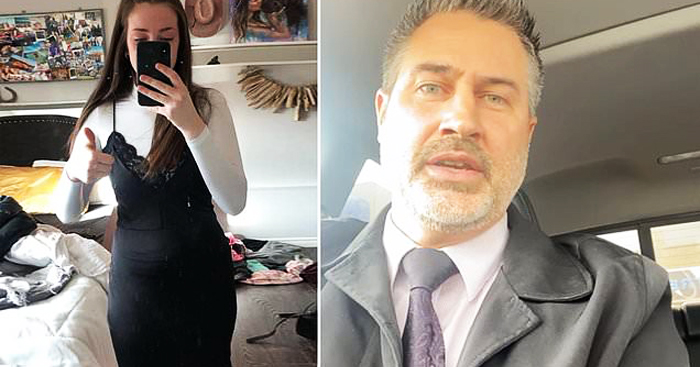 Girl, 17, Sent Home From School Because Her Dress Made Teachers ‘Uncomfortable’

Nothing enrages a father more than hearing that a man had… thoughts about his daughter’s clothing. But Christopher Wilson never imagined it’d happen to him until he saw his daughter sobbing when they got home. The reason?

Wilson shared on Facebook, “Today my daughter was sent home for wearing clothing that made her female teacher and her male student teacher ‘feel uncomfortable.'”

In anger, Wilson went live on Facebook and shared the incident.

Wilson is a conservative Canadian man and always teaches his daughter to dress conservatively. Because of that, he won’t let people tell him that his daughter looked inappropriate or anything less than modest. He sternly warned, “If you’re a teacher and you’re distracted by clothing your students are wearing, then you are in the wrong profession.”

Yet, his daughter was picked out from her class in NorKam Senior Secondary school in Kamloops, British Columbia. She was told that she ‘needs to leave class’ because she made her teachers feel uncomfortable.

Her name is Karis Wilson, a 17-year-old high school student.

We all know just how demoralizing that is to a girl who was ready to have fun at school with friends and study. She looked just fine and the abstract dressing code regulations did not even dictate how long her dress was supposed to be.

The 6-minute rant explained how he, who had a teacher as a mother, could not understand why this happened to his daughter.

The video went viral quickly, with many parents who’ve gone through the same thing feeling livid—tens of thousands of views with more than 1.2k shares and over 1.4k reactions. The school refuses to reveal details of the teachers involved quoting Canadian’s privacy law.

Wilson’s father used the tag #ImwithKaris which went around as people shared their support for the girl. Karis’s classmates banded together to start a walkout to defend Karis’s rights.

One of the banner reads, “Am I distracting you with my ‘midrift’?”

People are absolutely disgusted by the school’s actions.