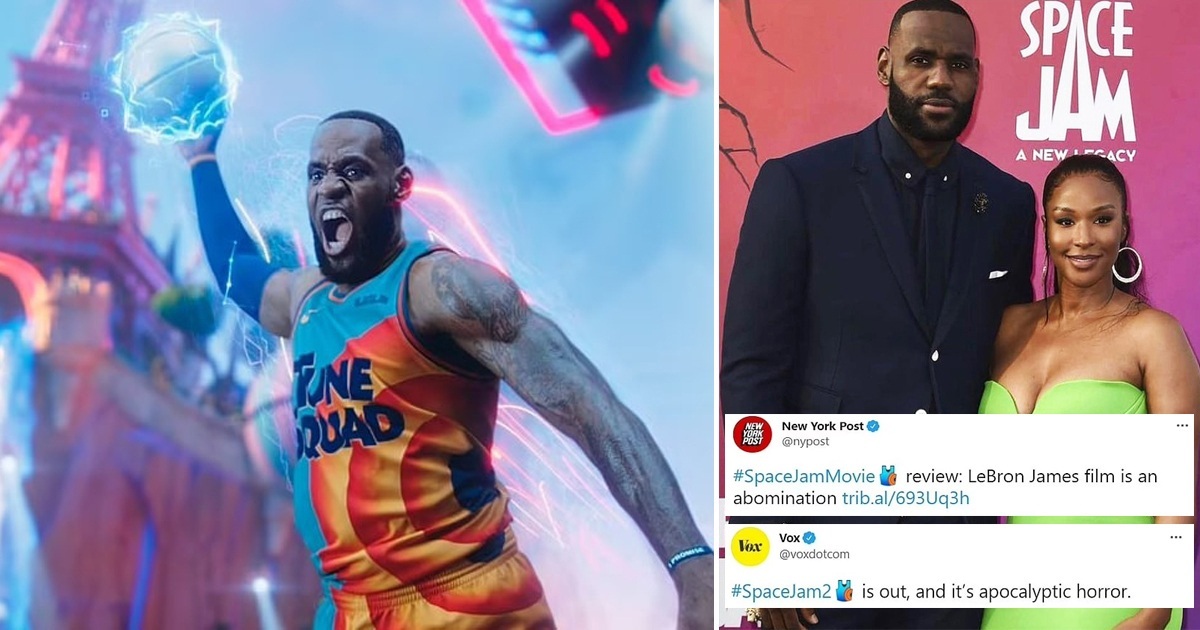 LeBron James remains the king of the basketball court, but this title didn’t establish itself at the box office. LeBron’s Space Jam reboot officially on Friday, and so far, the reviews are not the slam dunk hoped for. Warner Bros’ attempt at rebooting the nostalgic love for the 1996 ‘Space Jam’ helmed by Michael Jordan’ has garnered massive critics.

Space Jam: A New Legacy’ has been slammed by critics as an ‘abomination’ and an ‘apocalyptic horror.’

The 2021 movie debuted in theaters, and on HBO, Max presently holds a 37% Rotten score on Rotten Tomatoes. Critics slammed the film as an abomination and an apocalyptic horror. Similarly, early reviews also criticized Warner Bros for ‘vomiting up all their intellectual property by injecting almost every character into the movie.

Reviews have also criticized Warner bros for injecting others of its characters into the movie.

The film has a budget of $150 million and serves as a sequel to the 1996 movie starring Michael Jordan.

The reboot, directed by Malcolm D. Lee, is focused on NBA Legend LeBron James and his efforts to form a basketball team with animated Looney Tunes characters to save his son, played by Cedric Joe, from an evil computer algorithm. In particular, the villain in the movie is the algorithm called AI G. Rhythm, played by Don Cheadle.

The reboot, directed by Malcolm D. Lee, had LeBron James and his family at the premiere.

At the moment, the film has a reported budget of about $150million and serves as a sequel to the original 1996 movie, which had featured characters including the Mask, Willy Wonka, King Kong, and Austin Powers. The Hollywood Reporter’s Frank Scheck claimed the introduction of many characters was only meant to appeal to Warner Bros’ marketing department.

Vox’s Alissa Wilkinson has since described the film as an ‘apocalyptic horror.’

“It all feels like Warner Bros ingested an emetic and vomited up all their intellectual property. Arriving a belated 25 years after the original, which was no great shakes, to begin with, Space Jam: A New Legacy doesn’t live up to its grandiose, overly optimistic title.” Frank wrote in his review.

The Daily Beast’s Kevin Fallon insisted that the animation and effects were confusingly ugly.

THR’s review pointed at LeBron, and it said: “Another problem is that James lacks the charismatic appeal of Jordan, who, although no actor, anchored the previous film with his sheer likability.” The New York Post’s Johnny Oleksinski called the film an abomination and claimed it was up there ‘in the pantheon of misguided sequels and reboots.” He added: “That’s especially true of cardboard James.”

The Daily Beast’s Kevin Fallon has said the reboot ruined his childhood memories of the first movie. He wrote: “After 25years of looking forward to the Space Jam sequel, we instead got ugly effects, crass corporate synergy, and two hours of LeBron James learning what an algorithm is.” Fallon insisted that the animation and effects were confusingly ugly.

Entertainment Weekly’s Mary Sollosi wrote: “Here’s the thing about basketball: it is extremely watchable. Here’s the thing about Space Jam: A New Legacy: It’s not.” Vox’s Alissa Wilkinson described the film as an apocalyptic horror while NPR’s Aisha Harris dubbed it “the ultimate vanity project.” In the same vein, the Chicago Sun-Times Richard Roeper said the film couldn’t be unseen. He added: “I’ve never seen anything like it. I also hope never to see anything like it again, and I wish I could unsee what I have seen.”

A post shared by Space Jam: A New Legacy (@spacejammovie)