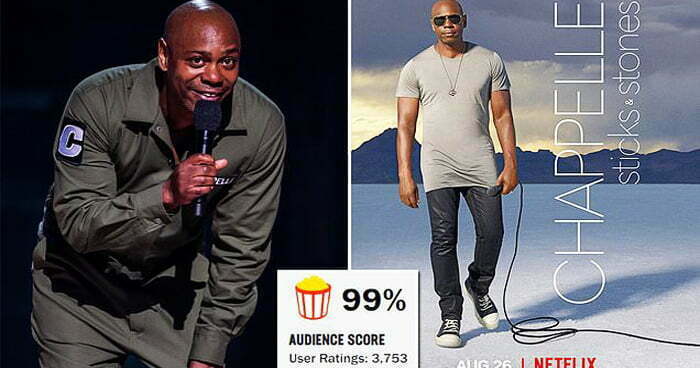 Chappelle’s new hour-long stand-up comedy on Netflix is gaining a lot of positive feedback – from the audiences that are. But Rotten Tomatoes has other thoughts because the show has only 33% ratings for Tomatometer. It even had a score of 0 before this by 5 critics.

It has an almost perfect score of 99% by more than 16k viewers.

Now, a lot of critics have been calling the stand-up comedy as a form of hate speech, but people just love how true everything the man has said.

Fellow celebrities were praising on his performance.

Chappelle has also stood up for his friends Kevin Hart and Louis CK. The two of them lost their shows due to homophobic slurs on Twitter. He also denounced Wade Robson and James Safechuck for filing sexual assault ten years after Michael Jackson died.

“Michael Jackson has been dead for 10 years and this n*gga got two new cases! I’m going to say something that I’m not allowed to say. I don’t believe these mother f*ckers.”

Meanwhile, Macauley Culkin, iconic child actor from ‘Home Alone’, gave statements that indicated Michael Jackson never molested him. And that may just prove that the two other were lying, according to Chappelle.

Then he went on poking R&B singer Kelly for being stupid because he kept a tape of him doing it with an underage girl.

Taylor Hosking wrote, “His approach comes off like a defiant rejection of change at any cost. As he keeps going down this path, drawing attention to the worst aspects of his important career, the biggest cost will be tarnishing his own legacy,” in a piece name “You Can Definitely Skip Dave Chappelle’s New Netflix Special ‘Sticks and Stones'”.

Various reviewers are, however, loving the skits and fun-poking Chappelle did, arguing that the ratings from critics were too political. What do you say?

Check out the trailer below and catch up on the stand up comedy on Netflix!