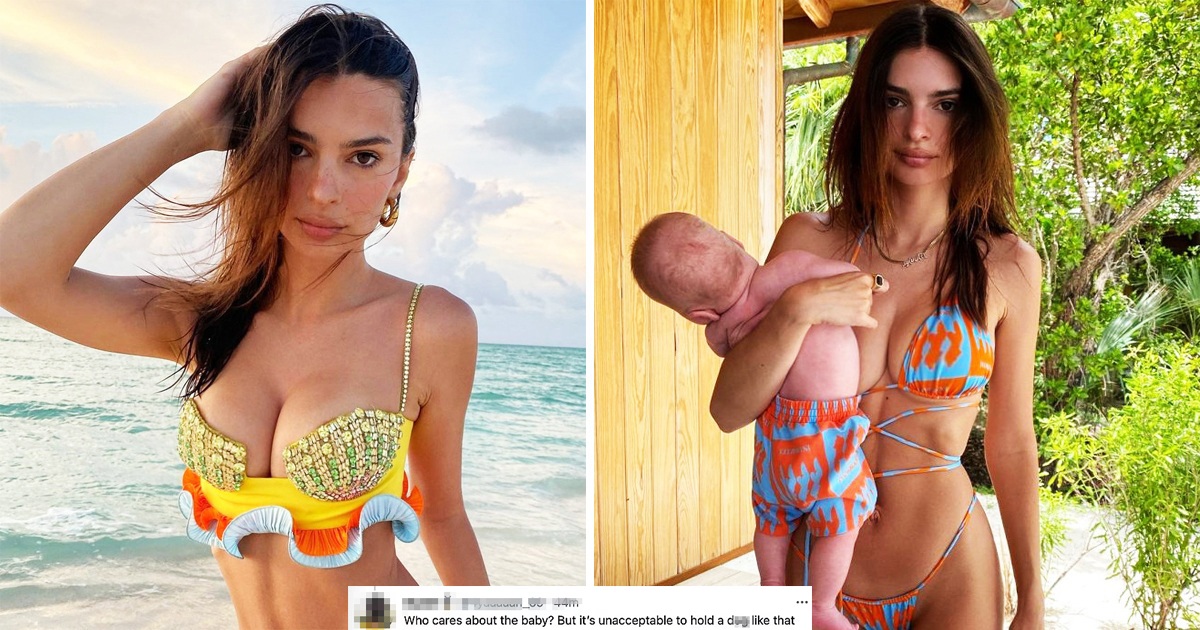 Emily Ratajkowski Slammed For Holding Her Son Like An ‘Accessory’

Not everyone is a fan of these photos: American Model Emily Ratajkowski is on vacation with her husband Sebastian Bear-McClard to celebrate her 30th birthday. But instead of being flooded with praises for her photos, Emily is instead slammed by the internet for the way she had carried her three-month-old son Sylvester in one of the several snaps.

Emily Ratajkowski slammed over the way she held her three-month-old son Sylvester in new vacation pics.

Many people have suggested that Sylvester is carried like an accessory. While Emily has since turned off her Instagram comments, people migrated to Twitter to slam how she held her baby boy. In the photos captioned: “Bday eve with the dream vacation partner,” Emily and her son rocking matching swimsuits.

In a few photos, the infant’s head is lobbed to one side and his feet were dangling.

The mom carried her son one arm and held him on the side to show off her blue and orange string bikini.

It equally showed the mom carrying her son one arm while holding him on the side of her body to show off her blue and orange string bikini from her Inamorata line. Baby Sylvester, who was lobbing to the side with his feet dangling, rocked a matching swim trunk that signaled that his mom might have a baby line in the pipeline.

Sylvester rocked a matching swim trunk that signaled his mom might have a baby line in the pipeline.

The vacation with husband Sebastian Bear-McClard is to celebrate Emily’s 30th birthday.

However, other photos showed her adjusting Sylvester in her arms and cuddling him tightly. But then, internet users overlooked and directed concerned over how she had carried her son like an accessory. More badly, a Twitter user went to the extent of sharing a side-by-side photo of Emily carrying her child next to a snap of her holding a dog.

The tweet captioned: “Why does she hold small helpless beings like a textbook,” within a blink, amassed over 140k likes and over 9K retweets as at this time of writing. Nonetheless, a few opined Emily wanted to show off her slim postpartum body in the photo, which resulted in holding her baby to the side. Some people were less interested in how she achieved her figure just three months after giving birth.

Within a blink, other users responded, but a few focused on her figure.