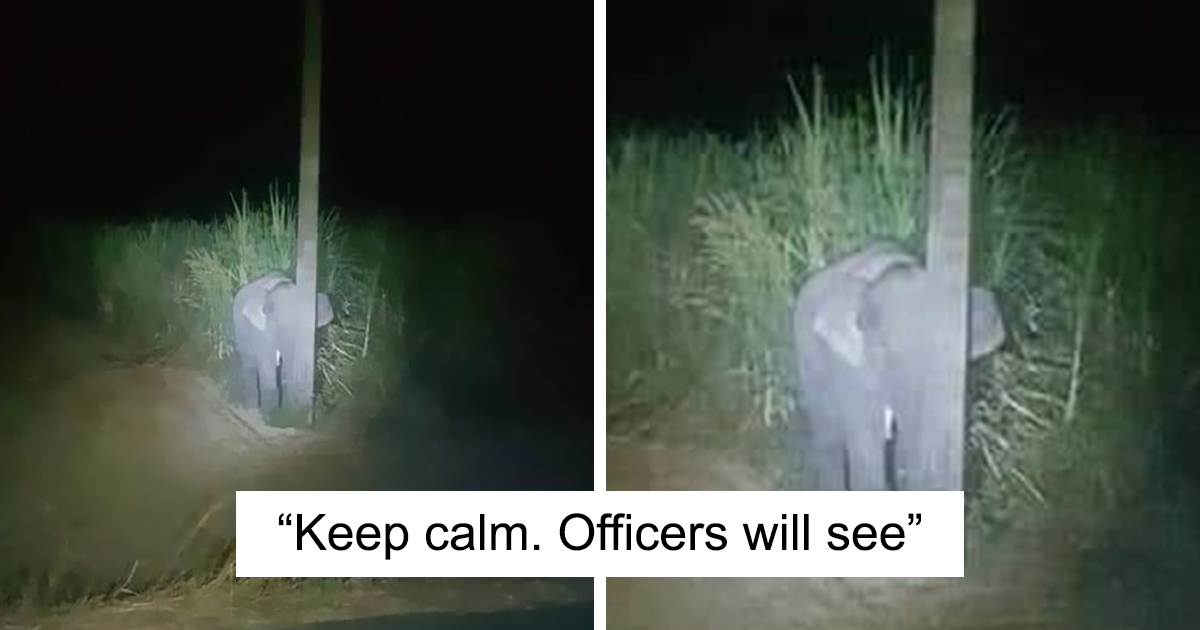 With floppy ears and playful personalities, elephants are recognized as one of the most lovable animals on the planet. If you’ve ever stumbled upon one, you can attest that all they want to do is play, feed, and, importantly, take cute baths. Here, out of the 2000 elephants living in the wild in Thailand, a baby elephant has attained the spotlight.

The adorable baby elephant is now all viral since filmed on camera in Chiang Mai, North Thailand. The elephant had been caught red-handed ingesting on some sugarcanes in a farmer’s field, and when approached, it immediately hid behind a light pole that’s narrower than its body. Local farmers, including internets users, couldn’t help but burst out in laughter at the scenario.

Wild Baby Elephant In Thailand Tried To Hid Behind A Metal Pole After Locals Caught It Ingesting On Sugarcane.

‘Still. The staff will see. Go and continue eating sugarcane.’ The caption wrote in Thai but translated to English reads. As seen in the photo shared by Facebook user @Weerawat Phrommuang, the cute baby elephant had come across some sugarcane and decided to have some sugary feast. However, the creature didn’t possibly expect that people will find it, but as the unexpected emerged, the cheeky baby elephant hid behind a narrow pole with hopes that no one saw it.

Local farmers saw the elephant having shone a light on it and despite being caught, it remained standing still, hoping it wouldn’t be spotted. Without a doubt, the hilarious photo had racked up a lot of people, garnering likes and comments. Interestingly, the picture has spread to other social media platforms, including Imgur, Reddit, and even Twitter.

Nevertheless, over the last 60 years, Thailand had lost quite a considerable percentage of its forest; thus, reducing the amount of space for elephants to feed. At one point or the other, this situation has led to human-wildlife conflict as elephants tend to now feed on crops grown for human consumption.